A Horse Walks into Hollywood

I still straddle the fence in my opinion of BoJack Horseman. I came out of this particular binge-haze unsure of what I had just witnessed. The cartoonish pleasantry of the first scene is offset by an abrupt darkness that throws the previous moment of sitcom nostalgia into orbit. BoJack’s callous, reckless presence is coupled with obvious depression (personified in the title sequence alone). He starts his morning with a vodka-and-prescription drug smoothie that is topped with carrots, because, well, he’s a horse. Freeloader/accidental friend/crutch Todd is trapped in his own unproductive life because of BoJack’s inability to be alone. Bo’s agent is also his ex. And a cat. There is a lot of obvious animal humor that serves to magnify the absurdity of a world where humans and anthropomorphic animals coexist and intermingle. 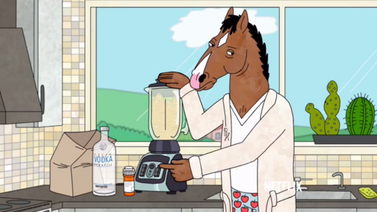 BoJack only gets more introspective with time, delving into the destructive nature of Hollywood celebrity. BoJack enables his former child co-star who had gone the way of disintegrating in front of the public eye. Comedic moments still abound, the show only gets darker. The horse ruins lives and falls in love with his human ghostwriter, or rather finds someone who understands him, a new addition to his need to prevent crippling loneliness. All the while his dum-dum, V-neck wearing rival (and golden retriever) Mr. Peanutbutter affably navigates the world with a naiveté and true puppy-ness that BoJack may envy. BoJack wallows in self-hatred and nostalgia. His Horsin’ Around days, the days of his sitcom stardom, the only days when he mattered to the world, are the days he desperately longs to return to, and there was no noticeable consequence to his Hollywood party-horse lifestyle. With more people existing in his life (namely that ghost-writer for his memoir, Diane Nguyen, who is the catalyst for the show’s premise), he begins to realize that being a jerk has its drawbacks. The penultimate episode culminates in a drug-induced plea for… something: “Please tell me it’s not too late for me. Am I a good person? Tell me I’m a good person. Tell me I’m a good person. Tell me I’m a good person. Please.”

BoJack Horseman is a bizarre ride that takes some time to get into the rhythm of. But once you latch on, there’s no getting off, and one way or the other this strange cartoon will stick with you long after the final credits roll.