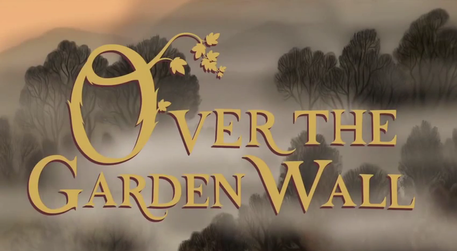 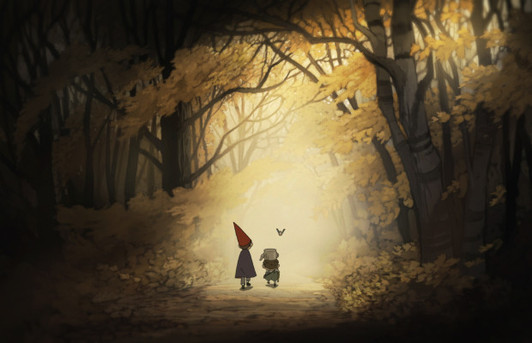 Over the Garden Wall is a ten episode, animated mini series that was featured on Cartoon Network from November 3 to November 7 of 2014.  The series was based on a short film called Tome of the Unknown.  Patrick McHale, who also worked on The Marvelous Misadventures of Flapjack and Adventure Time, created both the short film and the series.  The plot centers around two brothers who are lost in a mysterious wood called The Unknown.

The mini series plays on our best dreams and our worst nightmares, wrapping them together and slapping a big bow of ambiance on top.  It presents us with a substantial layer of humor and good-naturedness so that the underlying, eerie feeling of loneliness won’t be crushing.  The rustic, violin music coupled with the animation’s earth tones makes The Unknown seem like a peaceful place, but the people and things the boys encounter give the woods a contrary feel. In short, the series has just the right balance of familiarity and unfamiliarity to make people slightly on edge, but not full on scared.  Over the Garden Wall is a magical and beautifully animated mini series that is definitely worth everyone’s time, regardless of age.

When I first heard of Over the Garden Wall, I was super excited.  As a lover of animation, I am always looking for new and interesting shows to watch and become obsessed with.  Contrary to popular belief, animated films and television shows are not made exclusively for the enjoyment of children.  Just look at Family Guy, for instance.  Who in their right mind would ever say that it was made for children?  The best thing about the mini series is that there are no restrictions on the audience’s age.  There is equal appeal for children and adults both for the animation and the plot line.

For the sake of everyone reading this, as well as my own sanity, I will be talking about the first episode and then making brief comments about the ending and the whole series in general.  I think that the first episode really exemplifies the feel of the entire mini series.  So, without further ado, let's go into the Unknown...

Episode 1- The Old Grist Mill
The series starts off showing a frog sitting at a piano with a black background.  As the piano spins around, an almost melancholy piano melody is playing.   Then, the frog (Jack Jones) starts singing the song “Into the Unknown” in that smooth voice of his, while a montage of scenes that don’t make much sense are flashing by: a red haired girl sitting in a field with her dog, a turkey drawn carriage being driven by a black cat, a gorilla juggling in a circus, a bunch of wooden dolls, a man being scared by a shadow as he is looking at a portrait on his wall, an old woman cutting a string with scissors, two children setting boats adrift, a girl placing a candle on a ledge in front of a wall of bones, a giant fish fishing in the lake, an arm picking up a rock painted with a funny face, and last but not least, a girl getting water from a well while a man chops wood behind her.

After the title page is shown, the last words of the song are spoken as we catch a small glimpse of the woods.  The words explain a little bit (really vaguely) about what The Unknown actually is.  From just listening to the five spoken lines at the end of the song, we learn that the Unknown is somewhere along the historical timeline (God only knows where), few people have been there, and stories that have been forgotten are remembered once again.  Is it only me, or does anyone else sense a deeper meaning to the story yet?  I find it interesting that this so-called narrator is being so mysterious.  His vague insights about the Unknown give the audience somewhat of a view without giving them the entire picture.  It's brilliant!

As the song fades out, we meet our two main characters: Wirt (Elijah Wood) and Greg (Collin Dean).
After watching the entire series, I found the perfect gif to describe Wirt and Greg's relationship:

After realizing that they were lost and that they didn't even know how they got to the woods, Wirt immediately goes into overdramatic, poetry reciting mode:

"Though I am lost,
my wounded heart resides back home,
in pieces strewn about the graveyard of my lost love,
For only…"

He is interrupted by a sound in the woods that leads them to the Woodsman (Christopher Lloyd), who is a very important recurring character in the story.  While the brothers debate over whether to ask the Woodsman for directions or not, a bluebird offers her help.  This bluebird's name is Beatrice (Melanie Lynskey).  The Woodsman comes back again and offers the boys a place in his house for a while.  This is where he warns them of the Beast (Samuel Ramey) that stalks the woods and how it searches for lost souls to devour, effectively scaring Wirt and Greg.  He then goes on to welcoming the boys to the Unknown and telling them that they are even more lost than they realize (OOoo so ominous).  The boys soon come into contact with a beast-like creature that finds Greg in a barrel because of the candy trail he left to the house.  He shouts, "You have beautiful eyes!" before the creature roars.

After a long altercation with the creature, it turns out that it was just a dog possessed by the black turtle that it swallowed.  The Woodsman ends up getting angry because his entire mill is ruined after the fight.  Then, he tells them that what they thought was the beast was actually nothing even close to th Beast's level of evil.  He describes the Beast as "the death of hope..." and leaves Greg and Wirt off with a warning, "One more thing: beware the Unknown, fear the Beast, and leave these woods if you can.  It is your burden to bear!"  The boys then leave in search of a town so that they can ask for directions.


Other thoughts on Over the Garden Wall...


The Beast
Because there is so much buildup when it comes to the Beast, it's all the more creepy.  The true form of the Beast is only shown in the very last episode of the mini series.  Other than that, the Beast is only marked by a creepy shadow of a man-shape with antlers and glowing eyes.  Its voice also adds to the mysteriousness and eeriness.  Throughout the entire series, the Beast can be heard singing opera-style about surrender and just giving up.  He is trying to convince, not only Wirt and Greg, but even the audience to submit to the sweet release that death brings.
The boys find out that the Beast takes lost souls and makes them into Edelwood trees.  These are the trees that are ground up to make oil to light the lantern the Woodsman carries around constantly.  The Beast tricked the Woodsman into believing that his daughter's soul was in the lantern, when it was actually the Beast's soul.  The Woodsman finds strength to defy the Beast in the end, and goes back to his daughter.


I hope I was not the only one that absolutely loved the ending.  For a series airing on Cartoon Network for children, there were some deep, underlying messages that I got out of it.  For one, the Unknown turned out to be an after life not unlike the current notions of purgatory.  I usually am really good at predicting the outcome of movies and television shows, but this ending had me completely by surprise.  There is always respect for making me surprised, so kudos for that, Over the Garden Wall.  The entire time, I was fooled into thinking that the story was taking place in a fantasy-like historical period far from my own.  When episode nine came around, I was pleasantly surprised to find out that Wirt and Greg were from contemporary times.  They were dressed in such a silly way only because it was Halloween when they tumbled into the lake and had their near death experience together.  In the very last episode, Wirt eventually wakes up from unconsciousness, grabs Greg and his frog, who he ends up naming Jason Funderberger (after Wirt's classmate), and gets them all to dry land.  The police find them and they are taken to the hospital.

That brings me to the fact that the sibling love from the beginning to the end of this series seemed very realistic to me.  In the beginning, Wirt constantly blamed Greg for every little thing that went wrong in his life.  Now, even though Wirt was often the moody teenager who is just SOOO misunderstood, he ended up realizing how much he cared for his brother.  Even though they are only half brothers and Greg was always incredibly annoying, Wirt cares about him like only a brother could.  It may have taken Greg almost becoming one of the Beast's Edelwood trees for him to realize, but Wirt eventually put all of his dramatics aside and saved his brother.

As for the rest of the people that Greg and Wirt came into contact with along their crazy trip through the Unknown, I am very satisfied.  The very ending of the show is exactly the way it starts, with a montage.  This time, though, the scenes make sense and even give the audience closure.  The montage shows how Wirt and Greg affected the inhabitants of the Unknown in many different ways.


Over the Garden Wall managed to blend humor, scariness, and drama all into ten action packed episodes that are only about ten minutes each.  There are not many shows that can accomplish that.  Unfortunately, I don't feel that the mini series will become too popular.  It is too dark and deep to be sought after by the media.  Maybe it is for the best that Over the Garden Wall does not continue to make more episodes only because the series is already satisfying the way it is.  The series ended in exactly the perfect way and at exactly the perfect time, so I don't think it needs any more episodes to make it great.  My only wish is that the series would receive the amount of publicity it takes to have people all around the world watch the entire thing.


To end, I leave you with arguably the most catchy song ever.  (The music in this series is absolutely amazing in general.)