How Do We Respond to Hatred?
Ryan G.

Wally: So when did this trailer come out again?

Ryan: Way back in October.

Wally: Y’know, I still feel shocked after watching the trailer an hour ago. It makes me feel sick.

Ryan: I don’t understand what you find so shocking about it. You go running around, killing innocent bystanders in Grand Theft Auto and Saints Row. There isn’t a big difference between those games and Hatred, in my opinion.

Wally: I dunno, man, but it just seems so real… too real. At least in GTA and Saint’s Row the killing looks cartoonish. But here, the “birds eye” camera makes it look like TV footage.

Ryan: I know where you’re coming from and it’s a valid point. However, in the end it is only a video game, you aren’t shooting down real people. Heck, the opening speech made by the player character sounded like something a middle-schooler would write in a school restroom toilet stall. He says “My life is just cold and bitter hatred;” doesn’t that sound like a song by an emo band?

Wally: Well yeah, the monologue was really hammy, but I can’t shake the feeling that there are people like this, and I don’t mean like angry fourteen-year-olds, I mean people who don’t give a damn about themselves or anyone around them. They’d just kill without batting an eye. People have admitted that games influenced their violent actions and this game could also enable them to do so.

Ryan: Do you think kids joined the Bloods or Crips after they played GTA? Did Battlefield and Call of Duty make you want to join the army?

Wally: I didn’t want to, no, but it’s a possibility.

Ryan: I doubt it. Now let’s assume someone did decide to go on a rampage because they were roused by the character “wanting to die violently.” Let’s consider the amount of police, national guardsmen, army reserve, and citizens who exercise their Second Amendment rights. I seriously doubt the would-be mass murderer would get very far.

Wally: So what if one of them is stopped? Others seem to follow the act every year.

Ryan: There will always be people who are disturbed. However, we can’t put all the blame on video games. There are so many other factors—abusive households, treatment by the public, access to guns, even media exposure. If anything, the fact that CNN and Fox spend months hounding the bereaved and talking about what games the shooter played is what makes these potential killers more likely to commit the act.

Wally: Alright, I think I understand your point. The game really isn’t as big of a deal as journalists and the rest of the internet is making it out to be.

Ryan: If anything, it’s a smart move on the publisher for being able to create publicity just because of how easy it is to shock people. This game is going to sell pretty well I wager.

Wally: That being said, it still makes me feel uneasy. Y’know, the title says it all: Hatred is what the main character feels towards the rest of the world, it’s why he’s going out and shooting at everyone. I said it before, but I’ve never played a game where someone was motivated by pure, senseless hate. Anger? Sure. Revenge? I am on the fence, but there is still a reason for the character’s actions. This game? It makes me shudder thinking people like that exist and would do the same if they had the chance.

Ryan: I respect how you feel. I really do. But I don’t think this game or anything like it should be censored or banned just because it is disagreeable to someone. Really though, a lot of movies ought to be banned too if that did happen.

Wally: I’ll agree with you on that one. Just don’t expect me to play it. I don’t think I’ll ever appreciate this game.

Wally: What do you mean? You were defending it a minute ago.

Ryan: It looks really generic. Honestly it looks more generic than CoD. Seriously, Call of freaking Duty seems more exciting than this. The gameplay, or at least the bits shown in the trailer, amounts to nothing more than running around and shooting at people. The execution shots were great to look at, but you will probably find compilations of them on YouTube a week after the game comes out.

Wally: I see what you mean, it’s nothing new when put next to every other game about shooting people. One thing though; I will say I’m impressed an indie Polish developer was able to stir up this much controversy. Last time a developer caused a big fit on the internet… was that Phil Fish or Zoe Quinn? Well, I’m pretty sure neither sold that much after all the fuss they caused.

Ryan: That’s the way it is, man. Well, it was great chatting with you!

Wally: Yeah, until next time! 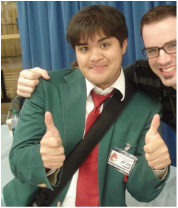