Breakdance Into My Heart

A very close friend of mine recently invited me to attend his school’s ingenious production of Break-dancing Shakespeare: Macbeth. After only several weeks of diligent work, the Director and Choreographer managed to teach non-dancers how to crump and groove and non-actors how to spit Shakespearean English as well as they can bust a rhyme. Though some viewers in attendance were not as enthusiastic about the performance, in this reviewer’s opinion Kingswood Oxford put on non-other than a wonderful endeavor at rethinking one of the Bard’s most famous plays.

Shortly after seeing this production, I spoke with several of the actors who told me all about the rehearsal process. Within ten short weeks, this small group of students filled with both non-actors and non-dancers transformed themselves in Shakespearean and breakdancing experts! The cast itself consisted of five street and hip-hop dancers and ten students whose previous experience with dancing ranged from years of on stage performance, to those who had only ever danced in front of their bedroom mirrors. . It was amazing to see how far some of the students who had never before danced in public had gotten. Lady Macbeth, who confided in me saying she had always thought she was born with two left feet, gave an incredible interpretation ofMacbeth’s less than sane wife. In fact, her solo dance piece, properly entitled “Out! Damn Spot!” in which she spun for several seconds on her head was tremendous! Though her other hip-hop moves were not as clean as other dancers’ she did her very best with what she could achieve, and in a fairly short amount of time. Furthermore, it does not matter in the grand scheme of the show whether or not every student was a terrific dancer, but rather how they were able to learn something new that they never thought they could.

This reviewer is baffled by several less than nice criticisms claiming the cast lacked discipline and that the show was, in one man’s words, “mindlessly throwing a bunch of white kids into the streets with people of color and calling it modern art.” This outrageous assertion could only come from an undoubtedly close-minded person who has never walked the halls of such a culturally rich and diverse school. Most of the teens who attend Kingswood Oxford have lived near or on the streets their whole lives. Assuming that some of these kids have not dealt with issues from the streets simply because they are white is not only absurd, but downright prejudiced!

Yes, it is true that not all of the young men and women in this production were perfect in their roles. But what really upsets this theater-goer, is the rude way in which people seem to be attacking an altogether brave and original high school production. None of these kids have ever claimed to be experts or professionals, nor is it necessary for them to be perceived as such. They are simply doing something they enjoy in an unconventional way. This is not the first reimagining of Shakespeare and it will not be the last. Productions similar to this one have begun to grow in popularity across the country in the past few years alone.  In fact, the Kennedy Center American College Theater Festival nominated and invited a college production  entitled Hamlet, the Hip-Hopera, only a few years ago. The show was met with such a large audience that it had to be moved to a larger venue, and even then, was standing room only if you did not get there at least an hour in advance. Times are changing, and directors everywhere are trying to re-envision literary classics that are less accessible to teens in urban areas into something they can connect with and enjoy.

At these types of shows you will often find people that claim a production is unimaginative because the Director has chosen to place the play in a modern setting. These types of criticisms are usually made by people who are trying to seem superior; however, by claiming to know more about art than the design team, they end up looking like a moron, and altogether inferior. When it comes to diversity in a show about bringing together street art and classic literature, you are bound to raise a few eyebrows depending on how you choose to cast. Though some may have felt the presence of white students was not appropriate for a show that celebrated new and more culture-centric styled dancing, it can also be asserted that their presence is necessary. You cannot claim to be a progressive artist or thinker while simultaneously denying a child’s passion for learning. Instead, you should allow students to work together in order to uncover their true potential, and along the way hope they learn something about one another. If you cannot enjoy a show because everything isn’t up to your ‘Broadway Standards,’ I feel like you miss out on everything the directors were trying to convey. Breakdancing Shakespeare is not something anyone will ever see on Broadway, because it is not meant for Broadway. It is meant for the young teens in less than ideal neighborhoods that can learn to understand something they thought they never could before. If you can’t see past your unrealistic expectations and enjoy a show like this for what is meant to say and do, then Breakdancing Shakespeare is not, nor will it ever be, meant for you. 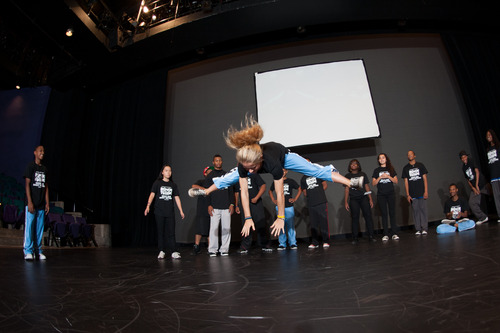