Community is a sitcom formerly on NBC that follows the misadventures of Jeff Winger, an ex-lawyer who needs a degree to rejoin his profession, and a study group he initially formed in order to hook up with a girl. The series has been struggling for years, so it is a wonder that it has managed to survive since 2009. Season six is set to come out next year on a streaming service no one’s heard about. All we need now is a movie and Twitter will explode with joy over one of their jokes being validated (for context: “six seasons and a movie” has been a running gag among fans of the show).

With that out of the way, I’ve always loved this show. It is quirky, funny, smart, and full of meaning. If you are new to the series and are interested in checking out the show, here are a handful of episodes I believe exemplify what Community is all about: 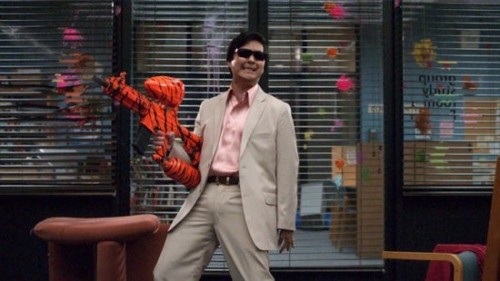 Professor Chang and his little friend.
The success behind “Modern Warfare” was its ability to parody the action-adventure genre while maintaining the uniqueness Community delivers in (almost) every episode. The premise behind this one is Greendale hosting a paintball game where the winner is given a Blu-ray player, which is changed to a DVD player, which is changed to priority registration for the next semester. Jeff goes to nap in his car after calling the entire thing stupid and later wakes to a scene that would have come from a zombie film, but with paint splattering the walls instead of guts. The study group makes modified quotes from action films throughout the episode, like when Jeff removes the magazine of a gun and asks its owner “No paintballs, Hans?” a clear reference to Die Hard. Towards the end, one of the defeated competitors reveals a paint bomb under his coat. He activates it and laughs, paying homage to the climactic scene in Predator, while Jeff rushes out of the room they were in (compare this scene at 1:51, note the clip was slightly edited, to this scene from Predator).

One of the staples of the series is its ability to reference jokes made much earlier, similar to (but much, much more effective than) Sheldon saying “Bazinga!” on The Big Bang Theory. In the start of the episode, Jeff makes a quip at a man with an afro roller-skating down the halls. Jeff may be old, but at least he wasn’t trying to bring back disco. Later in the episode, the study group gets ambushed by the same roller-skater and his friends. Jeff remarks “he brought it back.” Later on in Community, many of the gags and jokes would reference events that happened several episodes, even seasons, ago.

Another element of the episode that really worked was the character development of Jeff. In the first season of the show, he more or less acted as the main character; most of the action and study group’s shenanigans either affected or involved him directly. He slowly makes a shift from being an arrogant disbarred lawyer to forming a friendship with the other group members. In the end, Jeff wins the priority registration form, but he relinquishes it to Shirley, who revealed earlier that she wanted all morning classes so she could spend her afternoons with her children. Jeff is still far away from truly being a considerate person, but he has also come a far way from being the man who created a study group just to get in Britta’s pants (funnily enough, he actually accomplishes this in the episode). 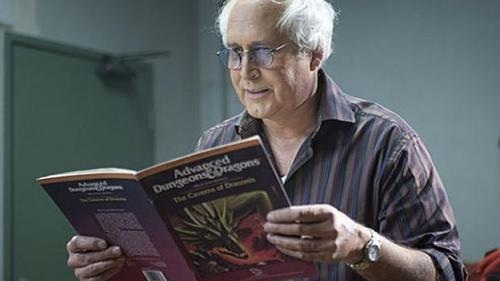 The outcast becomes the tyrant.
What makes this episode memorable is its fantasy motif—the cast is introduced with titles in a similar manner to Lord of the Rings, like Abed being referred to as “the undiagnosable.” Right off the bat, the narrator explains Jeff’s intention to play Dungeons and Dragons in order to cheer up fellow classmate “Fat Neil,” who has been depressed due to repeated bullying. The episode is able to maintain the fantasy adventure feel until the very end; when one of the character’s character in the game dies, a dramatic orchestral piece plays as he leaves the room in slow motion.

The real star of the show is Pierce. Outside of the show, many actors and directors dislike Chevy Chase because of how difficult it is to work with him. He is undeniably arrogant, but he consistently transfers this to the roles he is assigned. In “Advanced Dungeons and Dragons,” his disagreeableness comes to an apex, I seriously wanted to hate him because he was so convincing in his verbal assaults on Fat Neil (as demonstrated here; stop at 0:42 to avoid episode spoilers).

To put things into context, the study group knew Pierce would be a burden on their efforts to help Neil. However, Pierce walks in on the group playing D&D, accuses Neil of trying to “steal his friends,” and makes himself part of the game, despite Abed the DM (dungeon master) not creating a character for him. What follows is Pierce stealing the sword of Neil’s character, teaching himself the campaign behind everyone’s backs, and taking control of the scenario’s final boss.

I really wanted to step in and punch him in the face for derailing the group, but that really just means Chase once again succeeded in his acting. It also expands on Pierce as a character; he may be a dick, but his intention in the end is to fit in with the study group. While the others’ ages are between 20 and 40, he is an old man. One has to feel some sympathy, even empathy, for him—the pain of being excluded is something that can be felt by us all. Pierce, unfortunately, deals with his isolation more aggressively than other people and everyone has to pay the price for it. 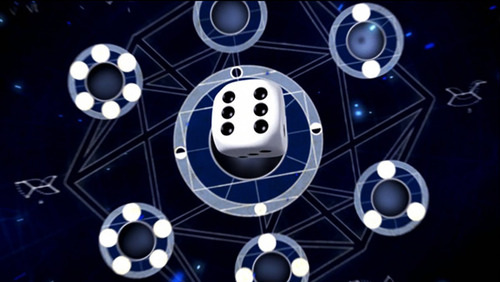 Some Yatzhee games end with your friend marrying the pizza-man. Others end with your apartment on fire.
At its core, all that is happening is the documentation of the same events seven times. We see Britta unsuccessfully trying to sing “Roxanne” by The Police and Jeff stopping her before she can finish singing the first word of the song (being “Roxanne”). Pierce brings up the topic of hooking up with Eartha Kitt in an airplane bathroom and Jeff hits his head on a ceiling fan when he goes to get a drink. At the end of each cycle, Abed contemplates about the other timelines.

The beauty of this episode is in its complexity amid a seemingly simple plot. The timeline diverges into seven paths when Jeff rolls the six-sided dice. In each alternate timeline, a different member of the study group is forced to get pizza from a deliveryman. A scene that should play out similarly each time instead undergoes radical changes depending on who’s the one going down to retrieve the pizza

“Chaos Theory” examines the role each study group member brings to the table and how the group suffers (or benefits) in his or her absence:


Each of the study group members is important, whether they help or hinder the others. They all contribute to the group’s identity; even if one is missing, the entire group is affected by it. “Remedial Chaos Theory” takes into perspective the interrelationships of the study group.

And there you have it. I feel as though these three episodes demonstrate the type of humor the show contains as well as the personalities, motivations, and relationships each study group member has. If these short analyses even remotely sounded cool to you, please check out the show. If you get hooked, you are in for a wild ride. 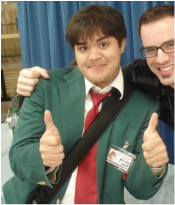