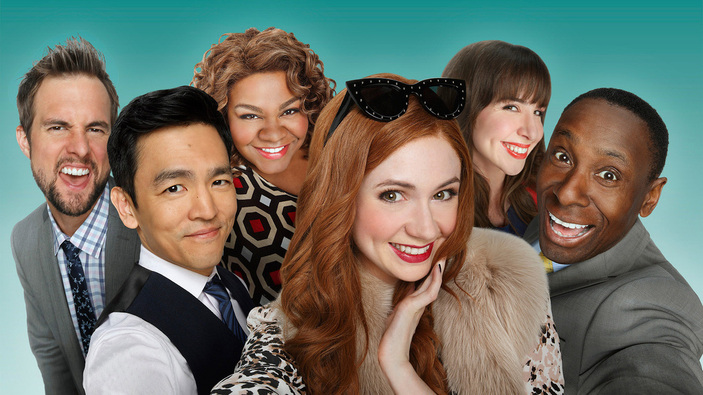 Brief Explanation:  My cousin Lacey and I had just watched the pilot episode of Selfie the night before. She then read this review I wrote and debated some topics with me. This is what happened:
Selfie is a new romantic comedy series on ABC which follows the self-image obsessed social mongrel Eliza (Karen Gillan) and her helpful coworker Henry (John Cho).

Lacey: That was vague.

Me: It’s a intro, it’s suppose to be vague so you can elaborate later.

Though the show strives to insult our current social media obsessed, it all together forgets how people actually work. The show reminds me of a high school drama series where the popular girl finds out she has no friends, outside of the social media, and enlists the help of someone less cool. Selfie creates Eliza to be ridiculously poor at face to face socialization and it’s like she is a preschooler just learning how to converse for the first time. When watching the first episode of Selfie I decided I hated the main character and all she embodied, it seemed the writers did not try hard enough to make Eliza truly likeable.

Lacey: Oh no, I like her, I think she is an accurate representation of the self centered bloggers today! I mean she is over the top but they have to get their point across.

Me: Yeah but you have to admit that at first you thought she was ridiculous and annoying.

Lacey: I think that is the point.

Throughout the episodes Eliza is just like a queen bee, except her workers do not want to work with her. In fact, no one wants to speak to her or really know how to. John Cho ‘s character, Henry, enters the show just like a knight in shining armor to save the unsocial able main character.

Although the episodes have made it clear that there is no romantic connection between the two (yet) there is still evidence that the two need each other more than they originally thought. Henry begins a rigorous process of trying to make Eliza a likeable and friendly person who needs to not be like a fake robot on the internet that no one sees in real life.

Lacey: I love Henry, I am so excited to see where their characters go, cause you know they are planning on having them end up together.

Me: Oh absolutely, but they need to make her more likeable first.

Lacey: She is likeable!

Selfie has many themes but the one that has been sticking out above the rest is how one should not let technology lead their life and to live for yourself and no one else. The show was meant to make Eliza over the top and in much need of being fixed, but they failed to make her likeable until the end of the first episode.

Lacey: Uh! The end of the first episode was so good.

I ended up not wanting to continue with the show until I saw some vulnerability come out of Eliza and make her somewhat relatable. “Why do the people of your generation feel the need to Tweet everything in your lives?” This quote made by Henry in the pilot episode explains who the show is targeting and the ridiculous impact that social media has on us. The themes presented in the episodes of Selfie so far have been quite funny and have made Eliza somewhat more likeable, though she is still ridiculous.

Lacey: Yeah, but you have to admit you want to continue with the show and see her growth.

Me: Yes, I do. But that was only after I saw her vulnerability and true self in the end of the pilot.

The writers chose to make her over the top to be more humorous in insulting the social media obsession and it is working. Once the viewer can catch on to the shows humor and over the top tendencies of Eliza, it becomes quite a guilty pleasure. Karen Gillan as Eliza is the most intriguing part of the show. Beginning this show already being a big fan of Karen’s work in Doctor Who and Guardians of the Galaxy, I was slightly taken aback. Karen is an incredibly gifted actress, she can be funny and intense showcasing how adaptable she really is, which is why it took me some time to enjoy Selfie.

Lacey: I need to watch Doctor Who. I saw GotG, she was amazing, I didn’t even know it was her til afterwards!!

Me: Yeah she always is, which is why I had a hard time with this character.

Lacey: Cause she has so much potential, but this show will get to that! They are showing how comedic she can be. They will reveal her amazing ability over time.

Me: That’s true. We saw a little already and I can’t wait to see more.

Karen’s previous works far exceed her performance in this show and make me want to see her do more serious roles. However, this show would not be nearly as good if it was not for John Cho. His performance in Selfie as Henry is perfect and really brings the show together. Karen and John together create a nice dynamic, making the show bearable.

Me: I do admit that those two together are awesome. They really compliment one another.

Lacey: Yeah they totally do. I know that there is going to be something going on with them, they have good chemistry and they are both helping one another transform into themselves.

Me: I love how the show sneaks in little sentimental moments between the two. It is building up chemistry but giving us just enough to keep watching.

Some of the scenes and aspects of the show that have been presented fall short and make me either craves more or less. There are a few scenes in the episodes thus far that have made me want more than some other unimportant scenes. Specifically the end of the pilot episode when there was a scene with Eliza and Henry. The performances and writing of that scene were poetic and beautiful to watch, and then it ended. I wanted more scenes like that; I wish there could have been a whole episode based solely around the last 5 minutes of the pilot.

Me: They were having fun and it was really genuine and nice to see. I hope they keep adding moments like that between the two it really shows their potential as actors and as characters.

Lacey: I bet they will. I think that is what the show is going to lead up to, there is no way they won’t end up together. It may take a while to get there but it will happen eventually.

There are some shows and movies that have had similar themes to them, but I enjoy how Selfie makes the cliché material new and manageable. Karen’s previous works have showed her to be an incredible actress who is fully capable of holding a scene on her own. As opposed to others like Karen on her show Doctor Who, her realistic actions and persuasion onscreen were inspiring and believable. Karen just performed as an assassin in the hit movie Guardians of the Galaxy and was vulgar and intense, a complete opposite of her other works. These performances have shown that she is a truly gifted actress which is why I am waiting for her to truly impress in Selfie.

There was a glimpse of her ability at the end of the pilot, but the writers need to give her more opportunity to showcase how unique and stong she is as an actress. The relationship of Henry and Eliza works to make the show watchable and provide a nice dynamic of the two. However, unless we begin to see more realistic and understandable behavior from Eliza, the show will quickly fall flat. There is so much capability for this show to succeed, especially with the amazing casting of principle roles. Therefore, the writers need to stop being redundant and explore all the possibilities these characters can explore to make the show succeed.

Lacey: I understand where you are coming from but I think they are doing a satire with Eliza and she will grow but they can’t do that in the first season or else they would need to think of something else to continue. The whole show is about Eliza growing up and becoming an independent woman without the aid of social media and Henry is going to help her and find himself in the process.

Me: Well I hope so and I am excited to see how it will all play out.