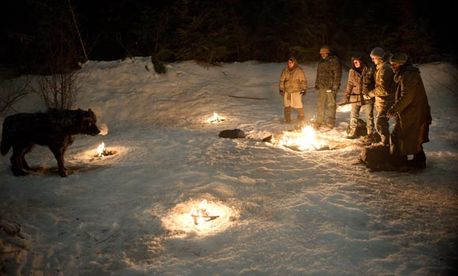 The Grey should not be a bad movie. It has Liam Neeson in it, for goodness’ sake. Liam Neeson, burgeoning action hero extraordinaire (The A-Team, Non-Stop, the Taken trilogy, to name a few). And yet so many things fall short here. For starters, it is longer than it needs to be. This movie is 117 minutes of men with no first names surviving in the Alaskan wilderness. It sounds like it has the potential for unique action movie cool, but it is weighed down by overarching agenda and honestly, too much nature – endless references to the setting we can clearly see them traversing, a sign of too much telling. The plane crash that acts as the catalyst for this cold adventure houses the longest death scene I have laid eyes on. Liam Neeson literally has to talk a man through the process of dying, and then we proceed watch that multi-step process unfold. Please just let that man die the same way just about everyone else on that plane did: immediately. Extensive scenes such as that one set the tone for the lengthy deaths that proceed through the rest of the film. I get it, not everyone can survive the wilderness, but everyone seems to want as much time as possible showing off their ability to die in interesting ways on screen.

At this point the film becomes rather predictable, so it would have been nice for more than just “let’s all try not to die” to be the main focus of the whole movie. Granted, survival is the point, but not much else seems to be going on. We get to see a bit into Liam Neeson’s character history (which I honestly don’t even remember), but there isn't much that makes me empathize with these guys except for the fact that many of their deaths were so narrowly able to be escaped – notably the man who drowns only inches away from the surface of a river due to inches of his clothing being caught underwater.


Oh, and let’s not forget about the wolves. The wolves act as an outer force that progresses the storyline and creates many of the group’s circumstances, which, again just about always turn deadly. They are the looming threat that drives the story along, but the wolves just add to the bleak picture of nature that is painted in this movie. The harsh aspects of Mother Nature and the wilderness are not in short supply here, which is a little discouraging, because there lacks any glimmer of hope that would make every unfortunate happenstance a little less saddening (rather than consistently and unfeelingly depressing). There is no chance for, or even attempt at, rescue. There is no possibility for happening upon civilization. There is only cold and forest and wolves and sad. Ultimately, The Grey finishes with Liam Neeson with a few broken bottles against an entire pack of wolves — a scene in which Neeson has the low ground in a circular clearing, while the wolf pack surrounds him above. He holds those bottles like a poor man’s Wolverine, readying himself for the ensuing bloodbath. Fade to black. Bleak. This movie certainly didn’t need to have a happy ending, but there could have been a much greater impact resulting from the carnage if there was even the slightest possibility for survival. I barely made it out the other end.