I've Heard it Both Ways 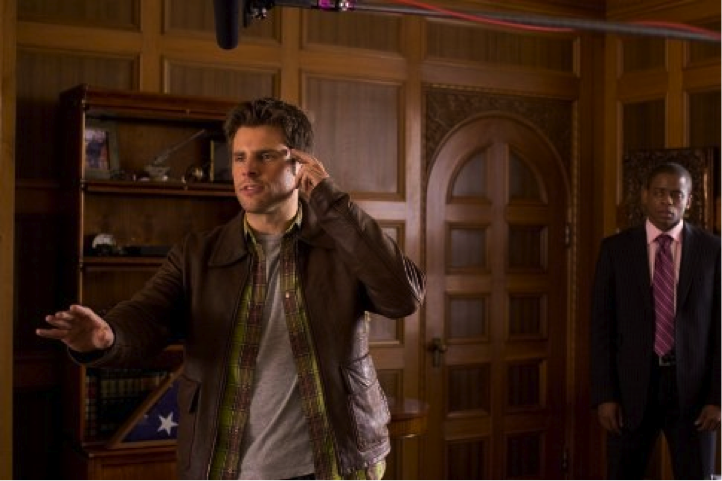 Shawn Spencer (James Roday)  and Burton Guster (Dulé Hill) in Psych.  Over the seasons, Shawn has become more mature and practical than his days as a liar and a player in the first few seasons.
USA Network’s Psych completed its eighth season run on March 26th of this year, leaving its loyal “Psych-O’s” satisfied, yet sad that the show was over.  Like many other television series, Psych lasted for eight seasons over a span of ten years.  Despite its long run, Psych was a show that always came up with new ways to make fans laugh, cry, and sympathize with each and every character they came in contact with.  (Yes, even some of the criminals on the show were relatable.)  “We’re gonna take this serious situation and make you laugh so hard at it you’ll cry,” the show seemed to say as it ran over fans’ heart repeatedly with its lovable characters.  Psych, a light hearted, amusing show with surprising depth is perhaps the funniest show ever aired by USA Network.

The series began with introducing the viewers to Shawn Spencer (James Roday), an immature, playboy who was doing practically nothing with his life.  Shawn’s father, Henry Spencer (Corbin Bernsen), is a retired detective for the Santa Barbara Police Department.  He raised Shawn as a single parent, and taught him from a young age how to be a great detective.  Because of this, Shawn grew up to be extremely skilled in observation and deduction.  Together with his reluctant, rule abiding, best friend, Burton Guster (Dulé Hill), Shawn tricks the interim chief of the Santa Barbara Police Department, Karen Vick (Kirsten Nelson), into thinking that he is a psychic.  Why, you may ask?  Well, because he was bored!  Why else?  The first few seasons focused mainly on Shawn’s work with the SBPD and his childhood experiences with detective work.  The series, as a whole, emphasizes the importance of truth, and how even when you grow up, you can still hold on to a little piece of whom you were as a child.

Psych depicts the art of growing up in a way that other shows do not.  The humor in all television series' is substantially different from one show to the next.  Psych creates a light atmosphere by creating silly little gimmicks and quirks within each character; whereas the other two shows use a more methodical approach to humor.  For example, in almost every episode of Psych, Shawn and Gus end up in a heated whisper-argument that other people can overhear easily.  The humor in Psych is seemingly random and almost doesn’t even make sense most of the time, but that's the charm.  Besides the 1980’s references made, the jokes that Shawn and Gus often use have the viewers thinking, “what does that even mean?”  The point of the humor is not to make people confused, but to be so silly, that it makes people laugh even if they don’t understand why.

Much to the disappointment of Psych‘s amazing quality of a show, it is a by-the-book procedural show.

Every episode centers around one case that the Santa Barbara Police Department must solve with the help of Shawn Spencer.  Even with this boring set up, Psych manages to bring a fresh concept to the procedural show.  Every little “catch phrase” or gimmick that Shawn and Gus have creates a sense of familiarity in each episode.  The fans end up feeling like they are friends with the characters as well.  Throughout the years, Shawn and Gus have made up many different and often new gimmicks that keep the audience laughing at the absurdity.  Although the show seems like it mostly focuses on humor, it also has an underlying idea of growing up and how important the truth is when forming relationships.  The humor attracts the viewers while the underlying substance of the show hooks them.  The intelligence of the characters is clearly seen in how they interact with each other, and how they solve cases efficiently with each other.

Although Psych is mainly considered a comedy, certain reoccurring characters and themes of each episode can make an argument that Psych is a crime drama.  Obviously the element of the crimes happening in each episode can classify the show as a crime drama, but reoccurring criminals such as Pierre Despereaux (Carey Elwes), also classify the show as a crime drama.  Not every episode ends in which Shawn and Gus “win.”  Unlike many other crime dramas, Psych sometimes deals with criminals that the SBPD can not seem to detain.  Eventually, everything gets wrapped up somehow, but that is not always completely satisfying.  The biggest example of a sympathetic “bad” character is Pierre Despereaux.  He is a British art thief that Shawn seems to look up to in a weird way.  His awesome and downright unbelievable escapes from capture leave Shawn, as well as the audience, in awe of him.  Even though he is a criminal in legal terms, the audience cannot help but feel like they wouldn’t mind being tricked by him.  He is so good at what he does because truth doesn’t seem to ever be in his vocabulary.

The most relatable aspect of Pierre Despereaux is his lying and trickery.  Even if they don’t want to admit it, everyone lies.  The audience can look at Despereaux and see how even a good liar can only get away with things for a certain amount of time.  Eventually, you will be caught… that is, unless you’re Pierre Despereaux.  Although some of the events concerning Despereaux are somewhat unrealistic, the idea is the same.  Even if you elude truth for a while, it will always prevail in the end.  Even though Despereaux ends up escaping in the end, that does not mean he wont be caught in the future.  He has been caught before and only escapes through Shawn and Gus the first time.

Shawn Spencer is the complete embodiment of an immature adult.  He is constantly lying, lazing and cheating his way through life because he doesn’t want to do actual work.  As the seasons of Psych progressed, Shawn almost did a complete 180 in his attitude.  The main reason for his change is that he fell in love with his coworker, Juliet O’Hara (Maggie Lawson).  Although he still maintained his silly and comedic nature, somewhere along the way Shawn realized that Juliet would never be able to be with someone who lied to her constantly.  In season seven, Shawn even makes the huge decision to move in with Juliet.  This really shows how much he has grown up as a character, not just with Juliet, but also by himself.

The huge transformation that Shawn goes through all throughout the seasons of Psych makes the audience sympathize with him even more than they already did.  He betters himself in the name of love and change, and that is something that most people can relate to.  As for the characters in the show, not one person is hurt by Shawn’s change.  Everyone is happy for him and Juliet and most of them even like Shawn better now.  Especially Detective Lassiter (Timothy Omundson) who has always been suspicious of Shawn.  He knew from the get go that Shawn was not a psychic, but came to be proud of Shawn when everything comes together in the end.

Psych is a show that sees the difficulty of growing up so clearly while also making it look more fun than it actually is.  Through Shawn and Gus’ crazy banter and actions, people get an inside look on how true best friends help each other to grow up and prosper by each other's sides.  Even though the two men often disagree and get into little spats, it is clear that they love each other and would do anything for each other.  For example, after Juliet and Shawn started dating, Juliet needed to go undercover to catch a killer who’s victims were part of a dating website.  Gus, not knowing that she was undercover, went up to Juliet and accused her of cheating on Shawn.  Even though Shawn accused Gus’ new girlfriend of being a killer a few hours earlier, Gus still loved Shawn enough to be upset about Juliet dating another man.  The friendship seen between, not only Shawn and Gus, but also everyone in the show makes the audience wish they had friends in a similar way.  The amount of trust and camaraderie within the SBPD is precisely what people want to experience in real life.

The exploration of growing up and how the truth will always prevail is common among entertainment.  People find that appealing, therefore they find the characters in the show appealing as well.  Psych, has everything that any television show ever needs: humor, friendship, love, truth, and consequences.  The mistakes made and the actions taken by each character in the show reinforce their humanity, and let the audience know that it’s okay to make mistakes.  In the end, it is important to make things right with the people you care about.

There is no message that is more beautiful and true than that.

Sam is The Panel’s television critic.