About 2 years ago, I saw a performance of the widely popular musical Spring Awakening at Central Connecticut State University. I am a big fan of the show, I think it is brilliantly written and provides the audience with enough imagery to choke themselves, in the best way possible. The production I saw made me want to scream. I am not quite sure if the director or actors even read the script properly. As I watched this wonderful piece get misread, I could not help but get angry. I know every production and interpretation is different, but this was making a mockery of the characters and their stories.

I went into the theatre with all the preconceived ideas about the show lodged in my head, I could basically recite every word from the script because I knew that much of it. I could not wait to be immersed into the performance, but I found that it fell flat. The iconic characters were wrongly portrayed and I was perplexed and disgusted at how my favorite character was performed with so much inadequacy. My favorite character in the show is Ilse. She is strong, brave, shy, and so intelligent. Ilse knows more about life than anyone else and she is only a teenager. She is rarely in the show but when she is there it is poetic and insightful, every word she says is beautifully crafted until it turns into a sonnet and she has the most depth of anyone else in that show. What devastated me the most about this particular production was the way the actor ruined this beautiful masterpiece of a character. Ilse suddenly became grungy and lustful, she was aggressive and rude, I was appalled. She wore a short green dress symbolizing greed and wealth and that is never a central focus of her character. Ilse is mainly interested freedom and beauty in the world. The intention of the character was tossed aside and I was taken aback by how sloppy she was portrayed. The character written was not the character performed and I wanted to mourn for the audience members whose first time seeing this character was through false perception. I desperately craved standing up and yelling at the actress and explaining to the audience how wrong the character was they were seeing. Ilse is not a lustful deviant, she is a kind hearted and incredibly wise young woman. She has endured more than any woman could ever dread and yet she find beauty in any and all things, I could not believe what they had done to her.


The tragedy was not that it was a different portrayal of the character; the tragedy was that the playwrights intention and characters importance in the show was disregarded. Upon reading the show and seeing it multiple times I learned that the playwright, Steven Sater, wanted Ilse to be the wisest and gentlest of anyone. To see his intentions cast aside was disgraceful and sad.  I felt disrespected and I know that if the playwright had been there he probably would have had a few words to say too. I found myself at a crossroads after seeing this particular rendition of the show. The production as a whole was gorgeous. The set was two levels and modeled after an old playground so there were old metal handlebars and seats. The set also looked like it had been overgrown with moss and trees and it really portrayed a sense of innocence lost which is the purpose of the show. The set was incredible and I loved what they did with the intense material, but I was stuck on the actors betrayal of Ilse’s story.

Sometimes an incredible production can be brought down by one person and it may not have been their intention to misinterpret, but myself and a few others were disappointed with her performance. I would recommend the show to anyone because it is an important piece, but I would also want to make sure the characters were performed and perceived as written. 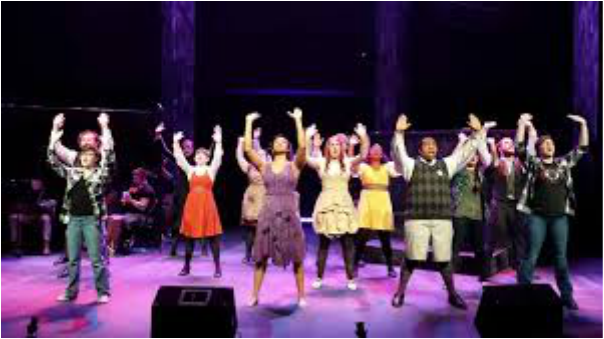