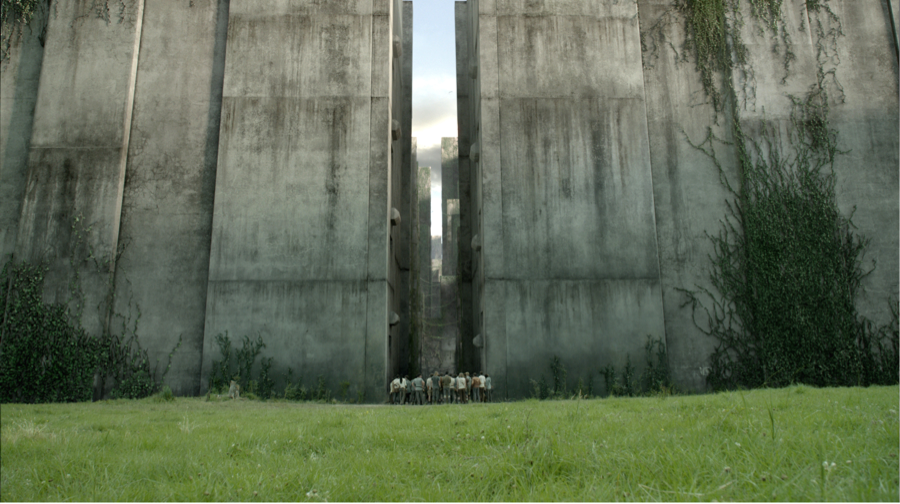 The Maze Runner, the first book in the The Maze Runner trilogy, came out as a movie on September 19, 2014.  It earned almost 62 million dollars at the box office as of October 2nd.  The Maze Runner’s main character is Thomas, a teenage boy who finds himself trapped in a rapidly accelerating elevator going upward with only his name as a memory.  When he reaches his destination, he meets a large group of boys, all teenagers, who tell him that he is now in what they call “The Glade.” 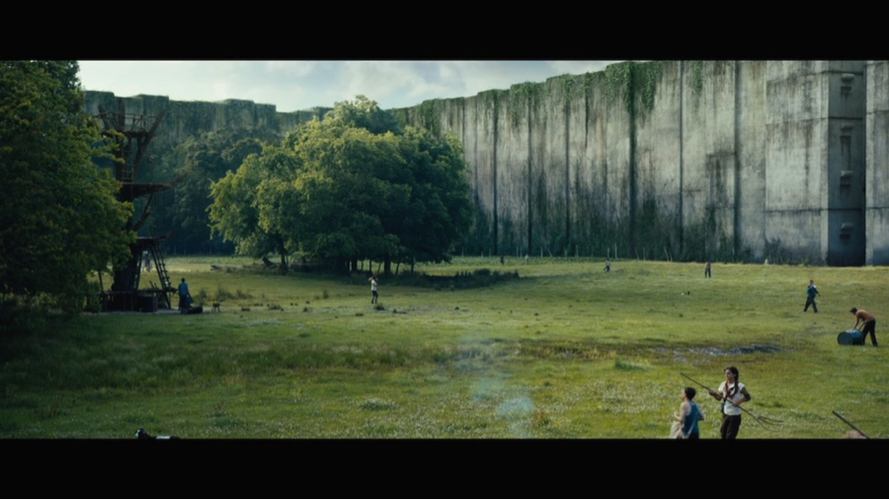 The Glade is a wide expanse of meadow with a forest to one side that is surrounded entirely by concrete walls that seem to stretch as high as the clouds.  Most of the boys trapped in the Glade have been there for years, depending on each other as well as themselves for food, shelter, and various other needs.  What Thomas soon finds out, is that the walls surrounding the Glade protect the Gladers from something much worse than being stranded… Grievers. 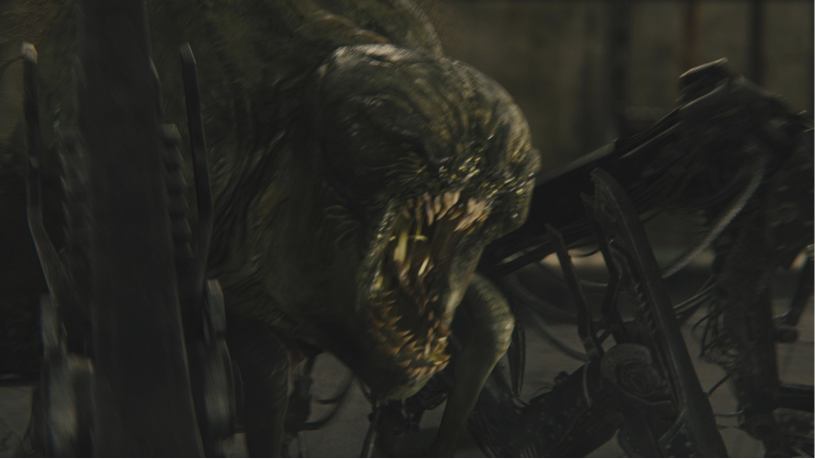 Grievers are the terrifying creatures that inhabit the Maze beyond the walls of the Glade.  The boys who are selected to run in the Maze and are trying to find a way out for all of them must beware these creatures as they go.  With a Griever’s sting, people tend to go a little bit crazy and start to regain their memories of before the Glade.  This leads to Alby and a couple others attacking Thomas at different times in the movie.  A Griever can also kill someone by sucking them into its fleshy, gooey body.  No one who stayed the night in the maze has ever lived to tell the tale.

The Maze Runner trilogy, written by James Dashner, was published back in 2009, and, since then, has been a hit especially with teenagers.  I, personally, am a huge fan of The Maze Runner, so I was naturally excited, and a little bit wary, to see the movie adaptation.  I drove to the Westfield mall theater with four of my friends to watch the movie. Most of the people with me were very excited because Dylan O’Brien, the actor who played Thomas, is also one of the main characters in Teen Wolf.

We all knew him as the loveable Stiles Stilinski, who has good intentions, but always seems to get into trouble.  All of us were intrigued by the idea that he would be playing a more serious role in which he would not resemble Stiles at all.  Speaking for all girls everywhere, there is no hiding the fact that Dylan O’Brien is extremely attractive.  Not only that, but he is a great actor.  He is very well known amongst teenagers, so he was the perfect choice to play Thomas. 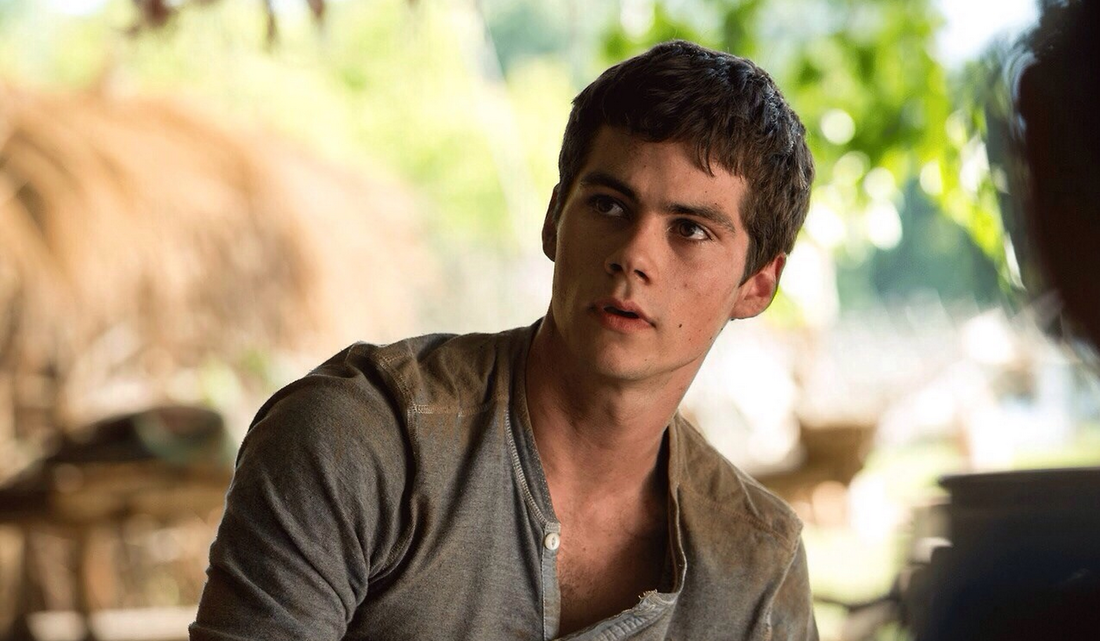 Since my friend and roommate, Courtney, is possibly the biggest Dylan O’Brien fan and she hadn’t read the books, I figured she would be the perfect person to review the movie. 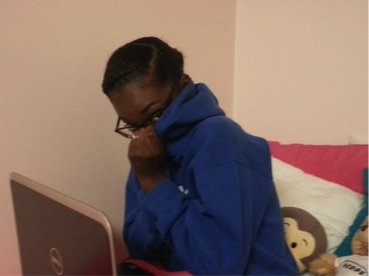 "Hey everyone..."
This is Courtney.  I was interviewing her rather late in the evening so she wasn’t too thrilled to be photographed.  After much begging and pleading, she got over it and said she would be willing to answer the few questions about the cast, the atmosphere, and just the movie in general so I could gain a better understanding of how she felt about it.  Before I even went into the questions, I asked her what the atmosphere of the movie theater was like.  She said that it was very “chill.”  There were not many people there, so she felt like she could express herself throughout the movie.  The people that were there were very mellow and quiet.  This set up a perfect environment to watch the movie and really enjoy it.  Now for the questions…
The Plot

“I didn’t see it coming!”  she responded immediately.  Since she had no previous knowledge of The Maze Runner, she found the plot twists to be exciting and different than what she thought they would be.  I can't say I really agree since I found it quite predictable.  Clearly, from the beginning, Dylan was different than the rest of the boys there, but Courtney felt that the extent of his difference was really unclear until the very end.  Overall, she concluded that, “It was amazing!”
The Cast 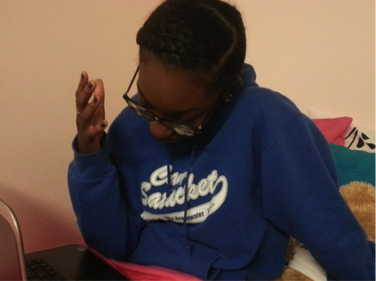 "Dylan's my man!"
Being such an intense Dylan O’Brien fan, Courtney immediately brought him up in the conversation. (I couldn’t really complain about that.)  After her initial fangirl outburst, she said that she enjoyed watching him transition from a television show, Teen Wolf, to the big screen. He is such a versatile an actor, and is amazing he is in every role either of us have ever seen him in. He is just as great playing a silly, good humored teenager as he is playing a character possessed by an evil spirit. During even the first scene of the Maze Runner movie, Courtney exclaimed, “Dylan’s about to blow this up!” I totally agreed that he would be the one to carry the explosive scenes and make the plot seem real for the audience. From her past experiences watching Dylan as an actor, Courtney knew that he would put his all into his role as Thomas. He seems to truly immerse himself in the roles that he plays, and because of that, he never disappoints his fans.  Another argument could be made here for him always disappointing his fans since I have never once seen him with his shirt off.

Will Poulter, who plays Gally, was the next actor Courntey mentioned in her long rant about the cast. Gally is a hard-headed Glader who was suspicious of Thomas from the very beginning. He knew there was something wrong when Thomas showed up in the “box” and then the first and only girl came up just a few days later. Up until the very end, he rebelled against Thomas, and against Alby and Newt as well. 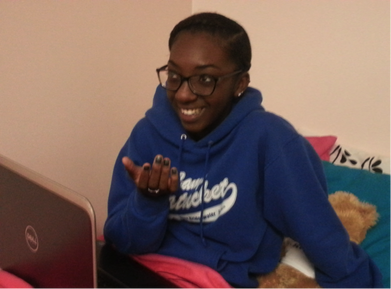 "I legit could not take him seriously."
Despite everything she said previously, Courtney believed that he truly did a wonderful job in The Maze Runner, and hoped he would expand his acting career to more versatile roles in the future. He seemed very professional, like he knew what he was doing, and that he would be a great upcoming actor to watch out for.  What a mediator.  The truth is, it takes an extremely strong actor like Johnny Depp to play roles that are completely opposite of each other and pull it off in spectacular fashion.  While Poulter really did try to branch out and take different roles, I don't think he pulled it off quite as well as he hoped.

Another cast member that Courtney brought up was Ki Hong Lee, the actor who played Minho. 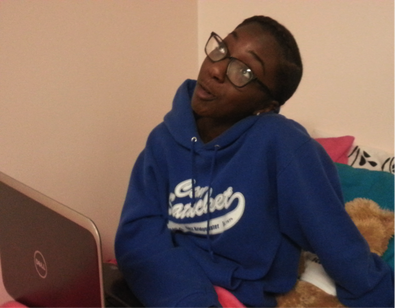 "Ooohh, he’s cute!"
As you can probably tell by now, Courtney really appreciates fine looking gentlemen.  I mean, who doesn't?  Generally, she felt that Dylan O’Brien made all of the other actors look amazing just by gracing the main screen with his presence.  His talent as an actor truly helped the other actors to set the scene of the movie. Courtney liked the fact that that Dylan O’Brien was the main character because he really sells the emotions to the audience.  It is true that he is an amazing actor… and he’s pretty attractive.  Make that REALLY attractive.  He’s also really attractive and he’s even a musician.  I really love Dylan O’Brien. *cough*  but anyway…
The Grievers 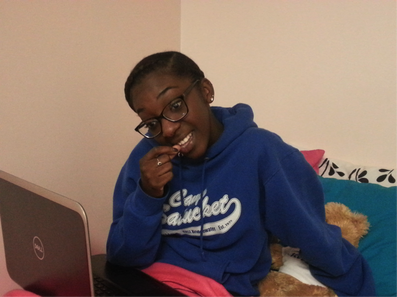 “They were weird.  I just wanted to ask them why they were so angry.”
She was confused as to why the creatures were half flesh and half mechanical. As expected, the movie didn't really do a good job of explaining how and why they Grievers were even a thing.  "They were very unattractive and they didn’t seem to want to change that anytime soon,” she stated sarcastically.  I agree.  All that weird gooey flesh and those razor blade arms are not what I would call "attractive."  If you really want to see an attractive person, just look at Dylan O'Brien.  He's attractive.  And how could you argue with that? (Especially when the Grievers are in the same shot as O’Brien,  they don’t even have a chance.)
The Maze and The Glade

About the Maze, Courtney really liked the idea of the corridors changing every night.  It gave the Maze a more mysterious and sinister quality to it.  While I also find this to be true, wouldn't it be super annoying if all of your hard work just went out the door each night?  I mean, the runners did nothing but run the maze all day in search of a way to escape, and then they go back the next day and have to figure out a new path.  Uh-uh.  Nope.  I would be so angry.  When the Gladers were around the campfire at night and bonding, Courtney felt like she was back at the summer camp she used to attend as a kid.  The homey experience of having friends surrounding you and even sleeping on hammocks was very comforting.  “It was relaxing to me!” she laughs.  Even though the Gladers were trapped in the Glade with almost no hope of getting out, they made the best of what they could with what they had.  That's really nice and all, but I would still be looking for an escape route to be honest.
The Ending

Courtney’s immediate reaction was, “I was so confused!  I really need to read the books now!”  When the Gladers left the Maze and came up to the WCKD laboratory, they found out that they were part of an experiment bigger than themselves.  Solar flares had burned the earth and were causing a disease called the Flare.  For some reason, teenagers were able to resist the Flare, so the scientists responsible for putting the Gladers in the Glade wanted to study them.  Unfortunately, their plans for the Gladers did not end with the Maze.  The scientists faked their own deaths and then are seen meeting in a conference room, wiping the fake blood off of their faces as the Gladers are “rescued” by rebels. 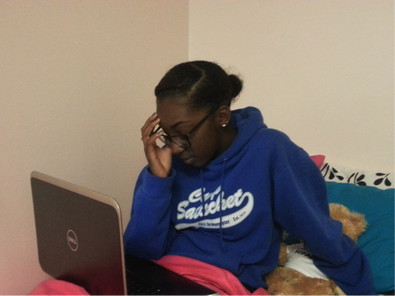 "Are you serious?  I'm so done."
The whole idea of the scientists faking their own deaths made Courtney super upset.  I agree.  I mean, how could someone lie to a person as handsome as Dylan O'Brien?  Although they had reasons for tricking the Gladers, it was a little extreme to fake their own deaths.  Courtney didn't see it coming that the Gladers were still under the influence of WCKD, and she hoped they would be able to return to their families after the whole maze nightmare.  To be honest, that’s the way it should have been.  Then again, there would have been no room for a sequel, right?