"Reign" and "How to Get Away With Murder"
By: Sam Lindsay
WARNING: CONTAINS SPOILERS 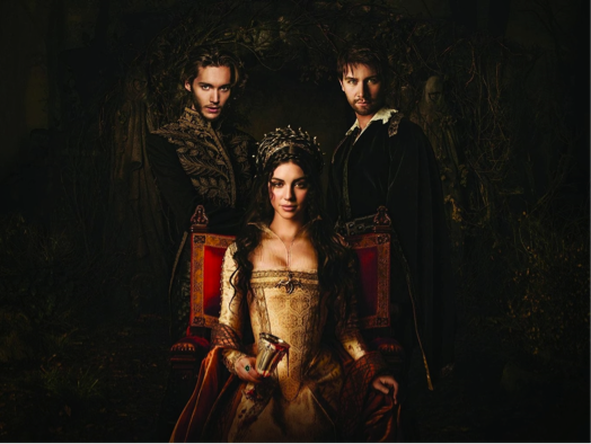 Adelaide Kane, Toby Regbo and
Torrance Coombs are symbols of
love and power in The CW’s new
show.

It is more of an ideal than a fact that royalty in the 1500s did the best they could for their people.  Often, all the monarchs cared about were that there were no uprisings amongst the common people that would threaten their rule.  Why then is Mary Stuart, Queen of Scots, held up in such esteem as being a just and virtuous queen?  How can someone say such a thing without being a tiny bit suspicious of what Queen Mary is really up to?  Along comes the show, Reign, making us believe that the French rulers in the mid to late 1500s were only concerned for their people.  The main characters coincide with mostly historical facts about the time period: Adelaide Kane is Mary Stuart, Queen of Scots and as independent as a woman could ever be at the time; Toby Regbo is Francis II Valois, the righteous, “pretty boy” son of the current king of France; Megan Follows is Catherine de’Medici, the conniving, Regina George-esque Queen of France who doesn’t know how to get things done without killing boatloads of innocent people.

In the first season, protecting Scotland seemed to be lower on Mary’s to-do list than traipsing around with her pretty girl clique made up of the highest nobility Scotland had to offer.  The four “ladies” that she brought with her from Scotland were also the only friends she had besides Francis: Greer, the completely irrelevant one, is portrayed by Celina Sinden; Lola, the one who slept with the future king and gave birth to his bastard son, is portrayed by Anna Popplewell; Kenna, the bohemian, hippie-like former mistress to King Henry II (Alan Van Sprang) is portrayed by Caitlin Stasey; and last but not least, the now deceased Aylee, a sweet and innocent girl murdered by the castle “ghost” was portrayed by Jenessa Grant.  Since her engagement and inevitable marriage to Francis (even though there was quite a scare with Mary being engaged to King Henry’s bastard son, Sebastian, who is portrayed by Torrance Coombs), Mary has been becoming more and more bold with the way she conducts her own politics.  She is now coming into her own as a ruler and disobeying Francis at every turn.  I mean, who can blame her when Francis takes just about five years to make one decision?  Especially in the second season, there seems to be a recurring “Francis yells at Mary because she messed up and Mary takes responsibility but says she doesn’t regret it” scene.  Almost every episode is like this making the audience wonder just how much Francis is going to take before his head explodes.  These scenes don’t seem to be too good for Mary.  They almost set set her progress in rewind.  For all the steps forward that she has made with Francis, it seems like she is now just taking more steps back.  Her whining, then abrupt, angry scheming almost gives the audience whiplash.  Mary Stuart is a chronic Veruca Salt until it comes time to protect the French or Scottish people.  Then, she becomes a regular Dr. Frank-N-Furter when he doesn’t get what he wants.  Clearly, the whole idea that life is sacred has never been a concern for any monarch ever. All they ever care about is their own passing whims.

Take Catherine de’Medici, an Italian noblewoman who ended up marrying King Henry II of France.  She is the terribly vicious mother-in-law to Mary Stuart who will do just about anything to keep her children alive and maintain her family’s power.  She is one of the most powerful and feared women in the country, which is more than most actors can achieve.  Catherine, along with her formerly faithful sidekick, Nostradamus (Rossif Sutherland), kills everyone who will get in the way of her keeping her power.  Some of these people are innocents whose deaths were “needed” to maintain peace in France. 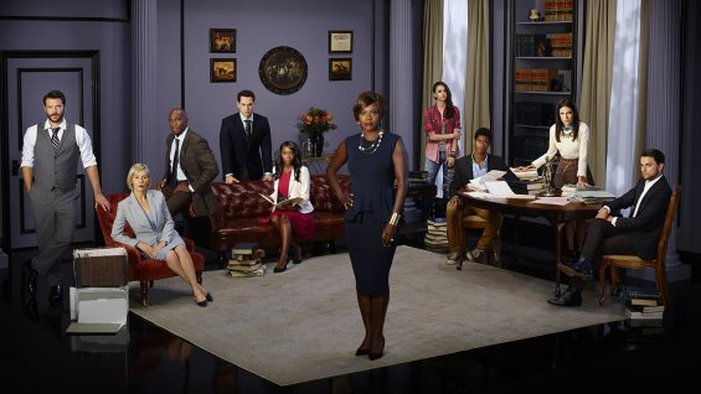 The first episode of How to Get Away with Murder is a series in and of itself.  The star of the show is a defense attorney/criminal law professor named Annalise Keating (Viola Davis).  Annalise has a large and in charge personality that hides her insecurities and inner sensitivity.  The show starts off on the first day of her criminal law class at Middleton Law School.  Professor Keating strides into the lecture hall with a brusque “Good morning,” and then manages to introduce herself and tell the class they’re in for a rough time at the same time.  Then, she delivers her famous line as she writes on the chalk board, “This is criminal law 100, or as I like to call it… how to get away with murder.”  For the duration of the class, Professor Keating picks out the smartest and most resourceful students to help her with a high profile case she’s working on.  The students she picks are: Wes Gibbins (Alfred Enoch), a bright eyed and hopeful first year law student; Laurel Castillo (Karla Souza), a quiet, brilliant student who is often underestimated; Michaela Pratt (Aja Naomi King), a huge kiss up who basically wants to BE Annalise Keating; Connor Walsh (Jack Falahee), an overconfident student who will use his charm and good looks to get information even when he doesn’t need to; Asher Millstone (Matt McGorry), the preppy son of a prominent judge, who Annalise sees something in that no one else does.  These five lucky students are asked to work at Annalise’s law firm with her other employees: Frank Delfino (Charlie Weber) and Bonnie Winterbottom (Liza Weil).  The rest of the season so far centers on different cases that the group works on together.  Almost the entire show is based on flashbacks of the criminal law class and the five students working with Annalise.  The flashforwards come in tiny bits and pieces that are more confusing than anything else.  They consist of four of the students (Not Asher) plus Rebecca (Katie Findlay), one of Annalise’s clients and Wes’ neighbor, freaking out over what to do with the person one of them just killed.  Throughout the season, the bits and pieces start coming together, creating a whirlwind scandal that will only be revealed in the season finale this coming Thursday.

The format of the show is remarkably different than the many cop and law shows that have been on television for much longer than How to Get Away with Murder.  The show, consisting mostly of flashbacks, is an interesting change from having only a few flashbacks.  The viewers learned something shocking about the main characters of the show in the very first episode, but then they get to know the same characters even more through the flashbacks.  By showing little snippets of the present, the show makes people anxious to know just how exactly the six young adults got to where they are at that moment.  Although How to Get Away with Murder is technically a procedural show, that is not the main focus.  The cases worked on in each episode are mere enhancements to the main plot and the development of the characters.  By working on the cases, all of the characters are displaying their strengths, weaknesses, and even their secrets to the viewers.  For example, Connor seduces a man, Oliver (Conrad Ricamora), who has a job that could give him insider information on Annalise’s clients.  To get all the information he needs, he starts sleeping with Oliver regularly.  Unfortunately, Connor didn’t seem to think they were in a monogamous relationship (when Ollie clearly did), so he slept with another potential source of information.   Oliver found out and told Connor he never wanted to speak to him again.  Connor seems to feel terrible about it, even going to Oliver's apartment to give him flowers, but he was sent away by a mysterious buff man.  The question is, is Connor starting to actually gain feelings?  Or is he still a soulless egomaniac?

Like I stated previously, How to Get Away with Murder is split into two parts: the present and flashbacks.  The flashbacks go from the beginning of the semester in Annalise Keatings criminal law class until the death of Sam Keating (Tom Verica), Annalise’s husband.  The abrupt changes from past to present are signaled by a sort of swiping sound and the distortion of colors.  Then the present scenes seem to be darker than the past ones, which reflects the dark state that the four students and Rebecca are in during the flash-forwards.  Also, the flash-forwards are drastically shorter than the flashbacks, so there is not much information in each one.  Each scene brings us only a tiny little half step closer to what is actually going on.  Because the details are revealed in such an agonizingly slow way, viewers always want to know more.  As Annalise said, “It’s always the one you least expect.”

The slow development of the flash forward scenes has been keeping the viewers on edge since the pilot episode of the show.  How to Get Away with Murder has an elegant way of infuriating even its most perceptive viewers.  Many people say that the show is making history because a black woman is the strong lead.  Also, there are a few scenes where Annalise is in her bedroom getting ready for bed, so she has her natural hair out and no makeup on.  This is significant to television because it really has never been done before.  Viola Davis is the perfect actress for the part of Annalise Keating because she plays the role with a proud and powerful attitude.  Her attitude is not only what makes Annalise such an intense and complicated character, but also makes the viewers root for her in any situation.  In short, Annalise is a “boss ass bitch,” in the words of PTAF, because she doesn’t take anything from anybody.

Everyone can learn a little something from Annalise.  Even the show seems to revolve around her.  Her personality and that fact that she’s the best at her job make her a very strong character, so the other characters seem less important no matter what.  It’s as if Annalise’s seemingly perfect life is falling around her in shambles, pushing her to explore what her life and her job actually mean to her.  She is being shot at from all directions, but is still managing to keep herself together… for now.  Just how long will it take for the great and revered Annalise Keating to break down like the rest of us?  Maybe we’ll find out this Thursday on the season finale of How to Get Away with Murder. 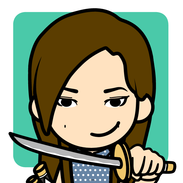