Over the Garden Wall is a 10 episode mini-series that premiered on Cartoon Network this past November. Many of you may stop there and say, “Why should I watch a cartoon created for children?”  And I can relate because at first I felt exactly the same way, as someone who hasn’t watched cartoons in years I can say I wasn’t thrilled when someone recommended me to check this show out. I am here to tell you though that after watching all 10 episodes I was honestly surprised at how much I enjoyed watching this show and that there is more to it than it may appear.

This cartoon was a refreshing change from what I normally think of when I imagine the cartoons children watch today. Whenever I babysit or am with a child watching cartoons I am typically appalled at the stupidity of the show and the crudeness of its humor. If you have ever seen shows like Adventure Time and The Regular Show then you probably know what I am refereeing to, but I have good news. While the beginning of the first episode had me concerned that Over the Garden Wall was going to be another run of the mill, idiotic children’s programs, once you get  into the heart of the program there is a lot of appreciate about the show. I was happily surprised to find that while there is some of the childish humor mixed in, that the overall show has much more to offer to the audience both aesthetically and in the content of the show. While you may have to keep pushing through the first couple episodes at times, I encourage you to keep watching as the pay off at the end is definitely worth it. 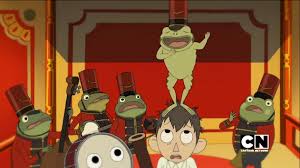 The first episode of this mini-series opens up with the two main characters Wirt and Greg wandering through a forest. At first glance there doesn't seem to be anything out of the ordinary, but gradually and then more quickly the show spirals into a much stranger and darker place. The story follows these two boys, Greg and Wirt, as they struggle to find their way home, along the way they befriend a talking bird, stumble upon a town of living skeletons, ride a boat of singing frogs who love the bassoon, and attempt to avoid the beast who stalks the travels. It might seem that this story is very surface level, some of the humor can be compared to other children’s cartoon shows that rely on silly and stupid comments to get their audience to laugh. If you look closer however you will see that this show has so much more to offer. It’s commentary on sibling relationships and the social pressures of being a teenager are very real and relatable to more than just children. It is revealed gradually throughout the episodes that these two brothers are half brothers, Greg the younger brother being the offspring of the new marriage and Wirt the older brother being the product of a first marriage. This leaves Wirt feeling a bit of an outsider in the family making him resent Greg. On top of this Wirt is dealing with the pressures of being a teenager. His two passions are poetry and playing the clarinet, but he believes that he has to hide this for fear of being mocked for it. He also has a crush on a girl, we learn toward the end of series that it is because of Wirt’s anxiety of this girl hearing his mix tape that the two end up in the Unknown to begin with. All of these issues are wrapped up into ten 10 minute episodes that also follow the storyline of these two trying to get home. The creator’s ability to combine these two storylines into one so seamlessly is very impressive because you don’t even realize what is happening until it is all over.

Over the Garden Wall is a dark and deep emotional rollercoaster disguised as a children’s programs. While it may have aired on a Cartoon Network it is certainly more than just another cartoon.