Who's Really "Faking It" 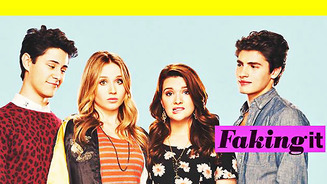 This season of Faking It’s newest episode, “Lying Kings and Drama Queens,” provided viewers with twenty minutes of highly anticipated musings into what drives Karma and Amy. Standing alone, the episode flowed seamlessly through the characters’ lives like the waves on a beach. Though Karma and Amy spent little time together in the episode, both of their storylines followed a feeling of anticipation and calculation as if they were a choice of prey in a lion’s sights. “Lying Kings and Drama Queens” reads like a soap opera with drama weaved throughout the plot; although it has an episodic feel, flashing between Karma and Amy’s lives takes away from the overall flow. Considering where last season ended and how this season has played out so far, the episode seemed slightly lack luster and didn’t live up to the stakes within the storyline. 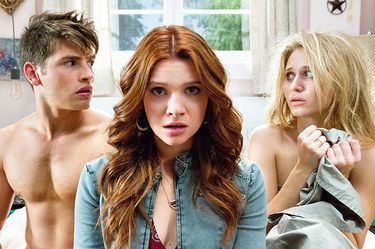 There has been so much drama surrounding Amy’s misguided night with Liam and Karma’s obsession with being popular, that it overrides what Faking It’s audience really wants: less drama! In fact, one of the minor – hopefully soon to be repeated – characters asked a question that has been on our minds for a while now: “Why are you [here] if you’re not part of this whole soap opera?” Based on the way the episode played out, we can assume the writers will continue to drag out the Liam-Amy drama, if not through Liam revealing his and Amy’s secret, than perhaps through another character spilling the beans. One thing is clear; the writers don’t want to let go of this “KArmy” drama. One thing that took away from the KArmy drama of this past episode, however, was the surprise return of Oliver and special guest star, Laverne Cox who gave the episode a much needed dose of freshness.

As for the story arc of this season, I can only assume that this latest episode will pull away from the every-day KArmy drama that we’ve seen in the past season, and move forward into a more robust storyline. Based on this season alone, Faking It seems to be a more mature Glee, with slightly less music. Though the writers seem to be milking Katie Stevens’ 15 minutes of American Idol fame by having her sing almost every episode, it is clear that the characters in Faking It are meatier than those in Glee. If the show continues to have Katie Stevens singing in every episode, this great show could slowly become a Disney Channel-eque nightmare. It is not necessary to have a character sing simply because the actor can. If the show continues this way, it may not stay afloat. I think Laverne Cox puts it best when her character Margo says, “Sorry I fell asleep and went back to 2009 when that story still felt fresh.” Though it is not intentional, the show relies far too much on the Karma singing trope. Where the show succeeds, however, are the new potential love interests that have come into play for Amy; the only problem is, the writers never seem to keep these characters around for more than one episode.

Even with the Glee-like singing and drama thrown into the storyline of Faking It, this season has shown us that it can steer away from stereotypical character plots that Glee clung to. The show has been quite successful at showing the struggle tens go through when trying to figure out who they are – this is clearly shown in Amy’s battle with her sexuality throughout season one. Though the controversial ‘lesbian plot twist’ has been done by a countless number of other shows, Faking It is not solely about a lesbian couple. In fact, the entire premise of the show is that Karma and Amy are not even a real lesbian couple. What matters is that people of all different sexualities and genders are being represented in a way that does not make a spectacle out of them.