Chuck vs. The Rewatch

NBC’s Chuck was the little show that could. I am endlessly surprised and overjoyed when someone says that they have even heard of it whenever I find a way to bring it up in conversation. I kept my fingers crossed every time the network ratings were in, hoping it would do well enough to make it another season because as you know, everything I love on television dies. Chuck survived through five full seasons, and was able to actually end as a series, so I am thankful for that. I recently came across Entertainment Weekly doing a recap of the show, and it’s just not doing this thing justice, so the action comedy drama is this month’s re-watch series.

EPISODE 1: Chuck vs. The Pilot 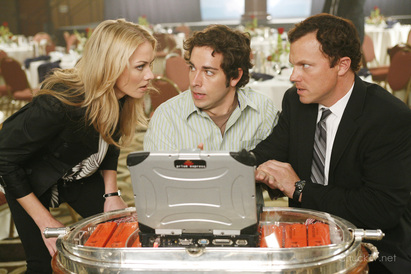 I have to admit, there’s kind of a lot going on this episode, but it’s a pilot episode, and it  will forever be one of my favorite pilot episodes of all time. Watching this was the first time I had ever seen a pilot that made me immediately love the show. Ok, biased gushing over. Let’s get into it:

Chuck is a regular, if nerdy,  guy. He’s a classic underachiever - he’s the supervisor of the Nerd Herd at his local Buy More, he lives with his doctor sister and her awesome doctor boyfriend (a guy so great he’s nicknamed “Captain Awesome”) - but he’s a little down on his luck.  He got kicked out of Stanford by his best friend Bryce Larkin, who also stole his girlfriend, so he’s really just a little lost : “I’m working on my five year plan. I just need to choose a font.” The episode opens on the birthday party-turned speed dating event  Chuck’s sister threw for him, which isn’t going all that well. While ending the night playing video games with his best friend Morgan, he gets an email from his old buddy Bryce. Fun fact: Bryce is in the CIA (“Bryce Larkin from Connecticut is a spy?!?”).  And this email contains just the change of pace Chuck needs - all of the government’s secrets, which Chuck has now accidentally downloaded into his head.

This episode is pure fun. The romance potential is instantly obvious in the chemistry between Zachary Levi’s Chuck and Yvonne Strahovski’s Sarah. The comedy-action dynamic flips like a light switch, but you’re never left in the dark. It is just perplexing enough to keep you intrigued and want to see where things go, just like Chuck is forced to.

EPISODE 2: Chuck vs. The Helicopter 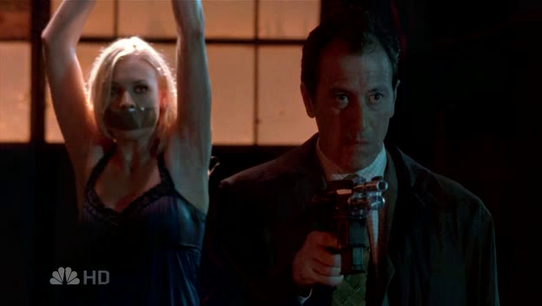 The first two minutes or so of this one explain what’s supposed to be going on in the show much better than I probably just did, which anyone getting into this show will be thankful for. We open on a conversation with a doctor who could potentially remove those pesky government secrets from Chuck’s head. Clearly that’s not going to end well. The (not-so) good doctor’s death results in some trust issues among the trio - the third prong in this operation being rough-and-tumble NSA agent John Casey, played by the wonderfully imposing Adam Baldwin (that’s Jayne, the Hero of Canton for all you Firefly fans out there). Espionage!

The group get back to the relatively tense way that it always is once they are faced with the resurrected doctor, who turns out to be a bad guy looking to do bad things with all the secrets he doesn't know Chuck is holding onto in his brain. We tap more into Chuck nerd aesthetic, as Sarah talks him through landing a real helicopter with knowledge he has from flight simulator games. Chuck and Sarah work on their communication (“I didn’t ask you to believe me, Chuck, I just asked you to trust me.”) and Casey continues to grunt in the shadows with his own agenda.

I may be romantically challenged, but two dates does not a girlfriend make. Yet that’s what they’re going with already between Chuck and Sarah. It sets up the fake relationship thing they are doing as a cover identity (which will totally become real, right?right?).
Chuck is pushed around so much in this episode even I don’t know who to trust (the whole thing is kind of spy vs. spy-lite).

EPISODE 3: Chuck vs. The Tango 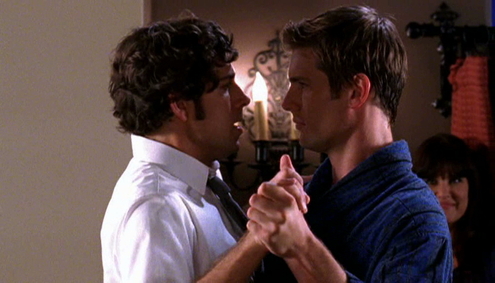 Art is pain. Seriously. Everyone’s dying over a painting that everyone keeps saying looks like garbage. Meanwhile at the Buy More, Chuck and his “stable of hoes” have to fix a mountain of hard drives so he can prove himself management material. At the same time, though, when asked where he sees himself in five years: “Honestly? I have no idea.” I know your feels, man.

Chuck is thrust into his first official mission, involving black tie affairs and an encounter with the notoriously elusive La Ciudad, whom no one has ever seen... and lived to tell about it. This nefarious creature is moving dangerous weapons through the artwork (Chuck finds it “very Bob Ross-ian”). Chuck tangoes his way into some trouble (“Apparently I learned the girl’s part of this dance, would you mind leading?”), but ultimately manages to haphazardly save the day once again.

This episode doesn’t do much for advancing the plot, but really thrusts Chuck into the spy world, making me sympathize with this poor guy who had a whole government-issue world thrust upon him.

Let me start by saying that this show has the best music of any show I’ve ever heard, rivaled maybe only by Friday Night Lights. The theme song is “Short Skirt/Long Jacket” by Cake. In these first three episodes alone, I’ve heard music by The Shins, Jet, and Beck. Good music can be hard to come by, and I’d implore you to keep watching to indulge in some perfectly timed musical underscores and interludes. The cast chemistry is also some of the best I’ve seen. They are a group of people it would probably warm your heart to hang out with. The show has a way of subtly tugging at your heartstrings that way, and the first three episodes really launch that attachment, especially to the adorable nerd and the beautiful badass that are Chuck and Sarah. With sly humor, the beginnings of tender romance, and surprisingly intense action sequences, I’m sure that I’m going to like this rollercoaster.