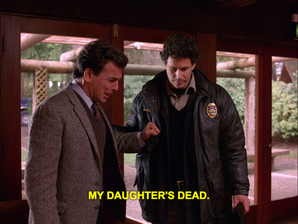 On October 6th, Showtime announced that Twin Peaks would have a nine-episode-long continuation in celebration of the cult classic’s 25th anniversary. Many fans of the serial drama screamed with enjoyment from the hilltops while I hid in fear of the fans coming out of the woodworks. I knew that the David Lynch masterpiece was unavoidable, so I willingly bit the bullet and watched the first three episodes to see if I should seriously be hiding in fear. With three episodes under my belt, I finally understand the obsession with Twin Peaks that so many people have. The combination of a descriptive plot and a slightly campy feel makes Twin Peaks one of the most memorable series that has graced a television screen. While watching, I decided to write a blow-by-blow experience of the early 90s drama. Hopefully, you will join me in this weird and interesting journey that is Twin Peaks.

The episode opens with a very funky bass line that I became very familiar with in the next few hours. After the theme montage played, the pilot begins with a body washing up on the beach of a small Washington town. The body belongs to a young blonde woman named Laura Palmer. Laura, clichéd enough, was homecoming queen. Of course, the whole town was heart broken over her death. Naturally following the cliché, the FBI gets involved; this gives us our main character. The main man of the series is the one and only Dale Cooper (Kyle MacLachlan), a pie-and-coffee-obsessed man after my own heart. Since pilots are made mostly to create attention and to gain a budget from a company, not a lot truly happens in this episode except the introduction of characters and the basic plot idea. Because of this, I felt as if the show opener was too long. Instead of the usual hour-long episode, we were graced with two hours of Log Lady, smooth jazz, and slightly questionable logic. Though I was originally turned off by the first episode, I decided to just push through and to keep watching. What truly encouraged me to keep going were the characters. Each one is unique in fascinating ways and holds an air of mystery. Though I couldn’t tell them apart physically (all the teen girls wear their hair the same way and all the sneaky business men wear suits), they are obviously all different in each action that they do. More importantly, I need to know who killed Laura Palmer. 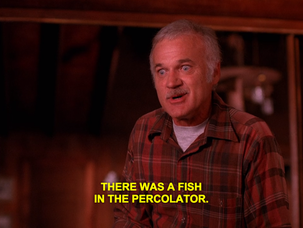 The second episode is a little more merciful to viewers. Now that the show is green lighted, characters can interact and a plot can work itself into action. Lynch, in a way gets a little ahead of himself when it comes to his goals in this episode. The basic plot is that Cooper and the rest of the Twin Peaks police department learn a little bit more about Laura Palmer. When we first learn about Laura, we know that she’s a tutor, volunteers, and is an overall good girl in the eyes of many people in Twin Peaks. However, that is only the first layer of Laura. We discover that Laura also traveled on the dangerous side of life and flirted with disaster in more ways than one. While watching, I suddenly felt overwhelmed with all that was going on. Parallel to learning about Laura’s double life, we get a glimpse of everybody else’s secret indulgences, including several extramarital affairs, drug addictions, and possible murders. I thought this was a campy murder mystery! At its core, that is what Twin Peaks is but there is so much more than what the show advertises and episode two is where we begin to see this. Don’t get me wrong, though, transition between the first and second episode flow extremely well and Lynch clearly knew what he was doing; I just wanted the show to go at a slightly slower pace. The first episode was too slow and then its follow up, too fast. I just wanted a happy medium. Luckily, episode three is what really hooked me on to this show. 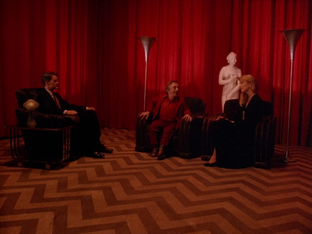 Episode 3: Zen, or the Skill to Catch a Killer

This episode is what truly sold me on watching all of Twin Peaks. It opens up with brothers Ben and Jerry Horne bonding over sandwiches and then traveling to a combination casino and brothel right over the Canadian border. This is just another layer on how scandalous the townsfolk of Twin Peaks are. Meanwhile, Agent Dale Cooper begins to use odd techniques in order to get a lead to Laura Palmer’s killer. This episode is not iconic because of weird doings of Dale Cooper or the scene where Leland Palmer dances with a photograph of his late daughter, but it is the last ten minutes of the episodes. The Red Room, as many people call it, is probably one of the most well known things about the show. Cooper’s dream is set in a waiting room of sorts where he speaks to a character known as The Man from Another Place and his cousin, who looks extremely like Laura Palmer. While Cooper speaks normally, the mystery man and the clone Palmer speak in a backwards tongue. Once Cooper wakes up from his dream, he knows exactly what he must do. This whole episode kept me in a trance of confusion and questioning but I still was fascinated. For the most part, Twin Peaks was just weird, not interesting. It was missing something and I could not put my finger on it. While watching, I asked myself if this was worth my time, but then I experienced the Red Room and like Cooper, I knew exactly what I must do, and it was to continue watching Twin Peaks. Here, David Lynch finally got into the proper swing of things because I loved the pace of the whole episode, not too much, not too little.


For people like me who have never experienced Twin Peaks, there are a few things that I have picked up to make your viewing will be more enjoyable. Rule one: just accept everything. I have discovered that if you listen to what the characters say and not question anything, you will enjoy watching the series a whole lot more. In general, I am a person that wants things to be realistic, but Twin Peaks is not realistic and as viewers, we need to remember that. Basically accept all and get into the crazy ride as much as possible. Rule two, it’s extremely hard to tell people apart. Most of the teen girls have short wavy brown hair. Focus on what style of clothes they are wearing. The men are not easy either; they all wear suits and have slicked back hair. Just hope somebody says their name. This may just be a problem for me since I cannot tell anybody apart in any series I watch. You could imagine my issues when I first started Mad Men. Another thing that is important to know is that you need to fully pay attention to this show. Literally, if you look down to check a text or run to let your dog in, pause the episode, because you will miss something. It is best to just fully immerse yourself in the small Washington town.

If you are looking for something to get into that has an interesting story and odd characters, then I suggest Twin Peaks. Despite a few laughable early 90s effects, the show is visually pleasing and a unique experience unlike any other. Now sit down, grab a cup of coffee and a slice of cherry pie and enjoy.
-Teresa Navarro