Don’t Move, but Actually You Have to Move
Or How to Criticize Modern Game Progression
Ryan G. 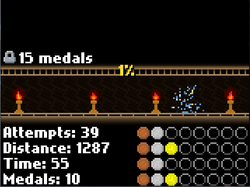 I moved.
I first encountered Don’t Move during one of my expeditions into YouTube, as the site has plenty of peculiar videos if one looks hard enough. Someone had decided to do a Let’s Play of the game and I was intrigued by its simplicity. This game seemed like something First Responder would get a kick out of playing, I concluded, and the rest is history. However, after reading his judgment of Don’t Move, he missed the point of the game.

Contrary to the game’s title, you are required to move, which soon results in the death of the blue ninja. Do not despair, as he immediately comes back to life in the middle of the screen. There are only two buttons (well, technically four) needed to control our ninja friend: the left and right arrow keys (or the A and D keys if you are more inclined to use the WASD buttons). By repeating the same task, dying continuously, you are rewarded with experience points, medals, currency, and trophies, all things that contribute to progression in a video game.

Gamers, regardless of how they identify themselves, love becoming stronger, richer, and recognized for their hard work in the virtual world. In theory, since Don’t Move allows for such progression to be achieved within half an hour. So why, then, does the game feel so unfulfilling to complete? Well, one does not need to look far to find an answer. I concede that the gameplay is boring, the graphics are boring, and the soundtrack is also boring. At least you overpower the music with the noise generated by the player character’s own footsteps. Realistically, just about everyone who plays this game will be yawning within minutes. 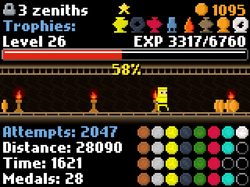 Stop me if you’ve heard this one before. You are a stranger in a strange land, weak and with nothing to your name. After a tutorial that acts as the first handful of stages or missions, you are free to partake in the many activities the game has. After hours of grinding, you get items and equipment that makes these activities even easier to do. In most games, these are simply stronger weapons and armor. Sometimes, they are things like fast-travel (such as in Skyrim, Fallout: New Vegas, and other Bethesda games) or buying out businesses that give you more revenue (like in the Saint’s Row series). Instead of being given something new or challenging, a lot of modern games have players doing the same tasks repeatedly, with the incentive of being able to do these tasks faster. When First Responder said that the “entire point was to keep on dying,” he was right on the mark. Unlike a lot of games, death is the key to beating Don’t Move; it is the opposite of games where you are required to kill others to continue. Dying thousands of times is what earns you progress in this game.

I can understand that some people may feel apprehension towards the game. The problem with Don’t Move’s message is that it does not do enough to criticize modern games. Even if many games have their players steadily becoming better at what they do, there is still a plot that drives the tedium. From saving the princess to saving the world, we know (subconsciously or not) that we have to keep on training or levelling up so we become strong enough to advance the story. In MMORPGs, the monotony is increased tenfold because of the amount of skills one has access to. However, even MMOs incentivize cutting down trees or mining away at rocks for hours on end; levelling up provides access to better materials or improved abilities. In Don’t Move, there is no motivation for anyone to keep on walking. 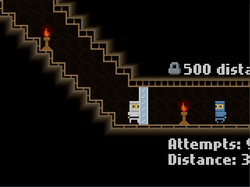 The end? Or is it just beginning?
Then again, this might be what the game was aiming to do. If there are no outside factors driving a gamer to do the same task continually, many games begin to look exactly the same as the next one. Perhaps Don’t Move was intentionally stripped down to have the most basic of gameplay to demonstrate this point. The game was not meant to be fun or engaging, it was created with the intention of pointing out the issues with today’s popular games. The cycle continues with each Call of Duty and Assassin’s Creed we get each year, but we keep on buying them. In the end, we are allowing ourselves to play the same game over and over again. While the message can be a hit or a miss, I earnestly recommend trying out Don’t Move if you have a dollar to spare and want a game that is minimal in its presentation, but meaningful if you stop to think about it. 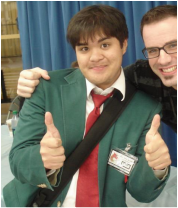