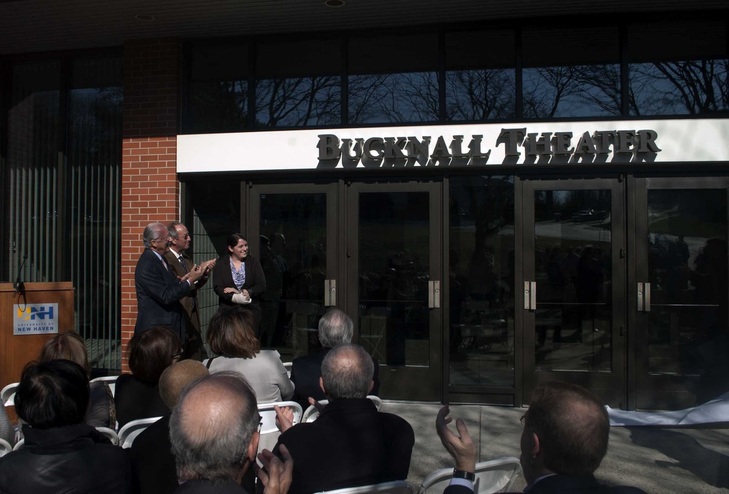 Bucknall Theater at the University of New Haven holds many different events. A lot of clubs hold events there and admissions usually hold events for incoming students there. The theater can be booked for all different people, no matter who they are. The only problem is that the theater department does not have first say in who can reserve the space and when.

One of the reasons this is so important to me is because so many times I have had to move or not be able to rehearse in the theater because of others being in there. In our directing class we had short scenes that everyone had to work on and rehearse and on so many occasions we could not be in the theater because there was someone else in there. The thing that bothers me the most is when admissions takes the theater without permission and therefore forces us to have to move somewhere else. This past spring semester we had rehearsals for the musical on Saturday for choreography and we were on the schedule for the theater, but every Saturday the admissions would be in there doing tours and presentations and so we all would have to find a big enough space to dance when we clearly were scheduled to have the theater. Our choreographer was angry because we sort of needed to dance on the stage for special reasons and when we could not have the stage because admissions took it from us we were forced to relocate when we shouldn’t have had to.

Having the theater taken from us was one thing, but what really made everyone angry was the lack of respect for the rules of the theater. After almost every event that was held in the theater the place was completely trashed and not only was that completely disrespectful to the theater department but also to those who have to clean up. I believe it is common courtesy to pick up after yourself so someone else is not responsible for cleaning up after you but that was never the case. The lack of respect people sometimes have for the theater is really sad. Firstly there is a rule that no food or drinks are allowed in the theater, now this is a rule the theater people often break, especially when we are in the theater for hours we need some food for ourselves. However, when we finish we know to clean up and make sure it looks like there was no food or drinks at all. I remember last year there was an event held in the theater and there had been a very nice crowd there, but later on when we were there, it was a pigsty. There was trash everywhere. The floor was covered in garbage, food, and spilled soda. The floor was sticky and there was food and trash all over. It was one of the most disgusting and disrespectful things I had ever seen. We were in the theater having an all night build for the set and one of the janitors came in to clean and she stopped right in her tracks, got on her cell phone was talking to someone. I remember her saying, “This Theater is trashed, I don’t know who was here but they left the biggest mess I have ever seen. It’s fucking disgusting.” After hearing her say this, my friend Katie and I decided to grab some trash bags and help clean the mess. Shortly after a few more janitors came in and told us to not worry about it as they cleaned but the whole time I felt so bad that someone would be that disrespectful. It is really sad to see how many people do not care for the theater as they should.

What is very irritating about people booking the theater when others need it is when those who booked it don’t show up. I know someone who worked in the theater for 2 years doing technical stuff and he told me that there were countless times where the theater would be booked and they would not show up at all. Not only is that wasting the time of those who work there and have to set up for the events, but it is also rude to others who could have used the space for other important things. A few times a group of us who needed the theater and tried to book it had to go somewhere else for their event while those who were booked in the theater never showed up. Knowing that the space was available the whole time was kind of like a slap in the face. I just wish people would have more respect for the theater department and if they can’t be there for their booked session, they should let others have it.

I am very passionate about the arts and how they should be respected. I understand if people do not agree with me, but this topic means a lot to me and to others as well and until some issues are resolved, I will continue to rant about these topics. They may seem small and unimportant to some others issue on and around campus but to those who basically live and breathe in the theater, it is our lives and second home so we want it to be respected.