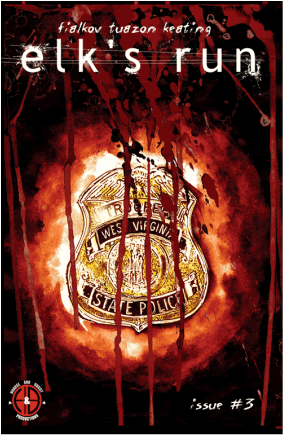 Issue #3 cover
“Everything starts small. A rockslide begins with a few loose pebbles.” In the small, West Virginian town of Elk’s Ridge, a tragedy thrusts an entire community into fiery chaos. A boy must become a man during his escape from pandemonium. A man must muster all of his strength in order to maintain the order he fought for long ago. Elk’s Run, written by Joshua Hale Fialkov and illustrated by Noel Tuazon and Scott A Keating, is many things: a coming-of-age narrative, an action-packed story of survival, a history of a town destined to fade from the maps, and a convincing argument to fight for what you think is right. Most of all, Elk’s Run is a graphic novel that should be experienced by all types of readers.

The story begins and ends in the quiet town known as Elk’s Ridge. The main character John Kohler and his friends are forced to witness a horrific car accident. After the incident, the terrible secrets of Elk’s Ridge are unveiled one by one and the suburban solitude is threatened when Kohler makes a decision to leave. The plot is very representative of many individuals who feel as though they are trapped in a life of monotony. Elk’s Ridge may look like the perfect, utopian society from the outside, but the tranquility comes at a price of which many are unwilling to pay. No one is allowed in. No one is allowed out. Things like alcohol and TV are unheard of in the town. As the story progresses, we learn why a town like Elk’s Ridge needed to exist.

The first thing many readers will notice is the art style. It looks sketchy and lacking in detail at first, but the hazy, if not a little eerie art grows on you after a few chapters. The artists really wanted to emphasize major moment in the story with greater detail (or a lack of detail altogether), such as the cycling between John and his friend’s facial expressions as they witnessed the accident and or the use of a silhouette as John is forced to kill another person for the first time. The delivery of the panels is cinematic, and the unfinished look of the graphic novel seems to compliment the story it depicts. All in all, the entire work looks like it could be the storyboard for a movie.

Elk's Run features both a sketchy, unpolished aesthetic and plenty of emphasis on faces.
There are few young adults in the town and the ratio of boys to girls of that age is uneven. While the majority of characters in the cast are not very interesting on their own, they all have interesting dynamics in their interactions with each other. Even in the utopian society of Elk’s Ridge, things have always been “off.” John’s father, unofficially the leader of town is borderline abusive with his wife, and yet she defends his virtues when he is questioned. She herself also exerts power whenever she can like when she yells at the citizens to unload a truck.  The townspeople all act cautions when two state troopers begin looking around. No matter how questionable or outright wrong their actions are, the citizens of Elk’s Ridge do anything they can to secure the stability of their community and the sanity of their men. As flames engulf the town, John’s father shows his true colors. As a soldier in the Vietnam War, he witnessed and committed many atrocities. The war took its toll on him and other veterans, which led to the creation of Elk’s Ridge. There, everything “felt right” to them. The city is the one thing standing between John’s father and insanity. 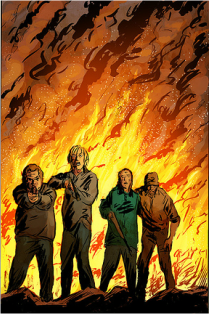 John finally confronts his father.
One of the difficulties newer mediums have is providing backstory and characterization. Since video games and comics generally move at a faster pace, these details are often ignored, compressed, or delegated to a small passage of text that can be overlooked (in the case of games). Elk’s Run is very reliant on flashbacks, though they are beneficial to the text. These flashbacks serve multiple purposes, such as developing the character it features or providing a contrast to what is happening in the “present time.” In chapter six, Kohler and his two friends, Adam and Matt, must dig their way out of a tunnel as they are being chased by Kohler’s father and several of the town’s men. The scenes of their struggle are interlaced with a much more brightly-colored scene of Adam and Matt enjoying issues of Playboy and The Rolling Stone. “I got your back,” Adam keeps reassuring his friend. Adam says this several times throughout the novel, and the flashback reinforces how close the two characters are. It also strengthens the despair to come at the end of the chapter.

Elk’s Run is a fantastic graphic novel. Though its characters and art style lack detail on the surface, there is a depth behind each detail. The story resonates with several readers; here is a tale about resolve, about escaping from one’s current life and forging a new one. In the book’s introduction, author Charlie Huston asks you, the reader, about what you believe in and how far you would go to defend that belief. Both John and his father strongly believed in their causes, which unfortunately were in conflict with one another. Despite their familial bond, they fought for what they felt was right. With its watercolor-like visuals and clever implementation of backstories, Elk’s Run also wants to know “What do you believe in? How far are you willing to go?” 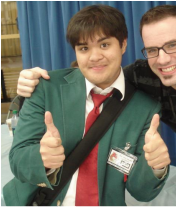