Not Your Typical Sci-Fi Story

The Man in the High Castle isn't your typical science fiction novel. By that I mean that there are no witches, wizards, mutant creatures, robots, aliens, or any other unrealistic elements that typically would fall under the heading of science fiction books. Not that there is anything wrong with those subjects, after all who doesn't love getting engrossed in a book that is completely unrealistic but at the same time incredibly enjoyable to read. The difference between works such as ­­­Ender’s Game, The Lord of the Rings, A Game of Thrones and many others is that those pieces seem to be a little far-fetched for most people, meaning that they couldn't actually happen, but most those that would read these books are completely fine with that. What Philip K. Dick did in this piece is create an alternative history that is so realistic and factually accurate that it is almost too plausible. What this text makes you realize is that if a couple of moments of our history had gone differently we could be living in a world like the one that Dick created in his novel The Man in the High Castle. 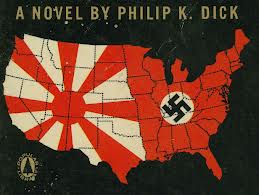 While reading this book I was struck Dick’s ability to create such a novel. By no means was it a typical story line, in fact I don’t think I’ve ever read anything quite like it. What he did was take a major moment in world history, World War II, and created a universe in which the United States lost this war and was now ruled half by Japan and half by Germany. World War II was a chaotic time in which the Germans thought that every race, especially the Jewish population (which apparently to them was its own race) was inferior to the perfect blue eyed, blonde haired human specimen. And so over the course of World War II they attempted to exterminate these inferior races by rounding them up and sending them to death camps. The Japanese invaded China in order to gain territory and force the people there to produce and provide them with raw materials since their rapid population growth was leaving their country short on necessary resources. In the end the US, Great Britain and the other members of the Allied powers defeated the German and Japanese Armies, winning the war. What Philip K. Dick did was take the facts of what happened during World War II and change them slightly but realistically so that the US ends up losing the war. For example in this alternative universe FDR is assassinated in Florida, which actually almost happened in our history except that it was a failed assassination attempt. Also in this alternative universe when the Japanese bombed Pearl Harbor (a US naval base in Hawaii) instead of all the ships being out at sea practicing naval maneuvers as in our history, all the US naval ships were destroyed crippling the US Navy and partially contributing to the loss of World War II. It is facts like this that made it almost too real to read since it was so realistic.

What made me want to read this novel though was the incredible plot line that had me as the reader constantly guessing as what was going to happen next? What Dick did was create several different characters that each starting out with no connection to the others, but by the end of the novel each of their stories were intertwined and dependent on each other (whether they knew it or not). Dick also managed to create another alternate universe within this alternate universe. Within this book, one of the elements that ties all the characters together is that they are all reading or are impacted by the book The Grasshopper Lies Heavy, which is an alternate history story in which the US won World War II and the world was divided up between Great Britain and the US. What is fascinating about this is that by the end the reader is left with the existence of two other universes, the one the characters are living in and the one in The Grasshopper Lies Heavy, both of which are different to the one they are living in. This, combined with the emerging world of espionage and hired assassins in Dick’s novel make it a fascinating piece that leaves the reader guessing until the very end.