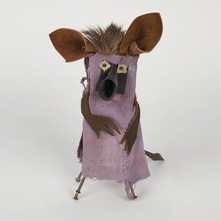 
Man Man starts their album with a few abrasive chords playing over again that slowly build up to include drums and the voice of vocalist, Honus Honus. Using a mix of unique instruments and whispers into the microphone, a unique sound has suddenly been created; “Knuckle Down”, the opening track of Life Fantastic shows promise to the beginning of a new album. With backup vocals and quick-tongued lyrics, Man Man shows a glimpse of their new and impressive sound. Life Fantastic is filled with grizzled howls, confusing metaphors, and a mix of instruments and ideas that contradict each other but work together to make a great album. Made in a more serious style compared to their last three albums, Man Man is not afraid to try anything, which makes this album so damn infectious.

Filled with 11 tracks (14 if you have the deluxe edition), the band takes the wacky sounds down a notch to create a rich, more self-fulfilling album. Filled with lyrics about death, relationships, and self-mutilation, fans can finally see the more humanistic side of Honus and crew. “Steak Knives,” the most painful song for the band includes lyrics like “We both want a piece of what will quicken the rot/We gotta wait for the day the dead will rise.” Written in honor of a friend that passed away, the song took over a year to write. Most of the lyrics on the album are quite somber, but the rhythms and melodies trick you into believing that the band is more manic than anything else. Honus believed that he was lacking a sound he once had before joining Man Man and Life Fantastic is the effort to find that sound he once lost. I guess the way to reach that sound is to include traditional foreign instruments and trumpets in every last possible second.

Man Man is no stranger to recording; before Life Fantastic, there was The Man In the Blue Turban With a Face, Rabbit Habits, and Six Demon Bag. All of these albums have a similar sound that was slightly whacky but hard hitting, a sound all of Man Man’s own; however, Life Fantastic is like having your favorite meal made by another person; it’s the same idea, but it has been cooked just a little differently. It is possible that Life Fantastic is divergent because, this time around the band recruited the help of Mike Mogis. Man Man’s past albums held a slight goofy feeling to them, thanks to cartoon voices and kazoos, but with Mogis in the mix, that is a thing of the past. Still clinging on to their tasteful clarinet and saxophone use paired with their choir of unique voices, the band has all of its original elements but with a switch up and a few new ingredients, a pay off came and it’s the obvious satisfaction of a similar but all together new sound. Honestly, who could blame them for not wanting to smash plates or scream a lot into the microphone anymore?

Imagine “Gold Teeth” (from The Man In the Blue Turban With a Face) stripped it’s tactless woodwinds and melancholy screams, only leaving the bare bones and then adding sharp piano rifts; with that combination, you would have the track “Shameless” on your hands. Slightly spooky, the songs should not strike fear in you, what you should really be worried about are their live performances. Breaking plates, using audience members as instruments, and other devices to create sounds is just a small example of how little the band cares about how people see them (or their safety for that matter). The group made their own niche in the alternative scene and they intend to keep using it as long as they can.

Man Man knows how to make the most self-loathing lyrics into a feel good song better than any other band I know. The only thing I wish that came out of this album is that the listener does not have to strain so hard to listen to what Honus really has to say. Sometimes, when listening you get so wrapped into the instrumentals or the lyrics, it is hard the balance the two together. However, these songs work well together on an album, I could never imagine “Bangkok Necktie” on Rabbit Habits. Man Man went out on a limb to find themselves and I’m thankful that their soul searching adventure paid off.
-Teresa Navarro