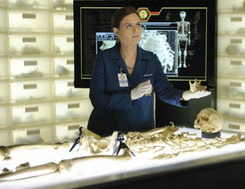 Recently one of my favorite television shows, Bones, premiered its 10th season, this made me realize exactly how long this show has been around. It also made me question however, how  has it maintained enough of a following to keep it running all these years? Because it has been around all this time though I wondered, do people who aren’t familiar with Bones  feel alienated  and overwhelmed by a show with ten seasons? After all that is a lot to catch up on.

Bones premiered on September 3rd 2005 on Fox, which makes it just over 9 years old. It is now on its 10th season, an accomplishment for any television show, and is still running strong. The show stars Emily Deschanel as Temperance Brennan, a world famous forensic anthropologist, and David Boreanaz as special agent Seeley Booth.  Combining the brilliance of world class scientists with the thrill of an action packed crime drama, this show has found the perfect formula to blow all other crime dramas away. This is because this show brings together an unlikely group of people including a group of eclectic scientists, an ex-military FBI agent and an FBI psychologist, all of whom had never combined their talents before; but working together they become and unstoppable team.  As long as you don’t mind a little bit of the gross out factor, which is inevitably present in a show that uses human remains to find most of their evidence, you should definitely give this show a try. It is addictive, with an unlikely sense of humor and a unique new way of solving crimes, this show drags you in and keeps you coming back for more.

It can seem a little daunting attempting to start watching something that is already 10 season long, and of course those first few episodes in which all the character’s back-stories have to be explained can make it difficult to get into the show. If I were to recommend one episode to really get a sense of the show, I would say try Season 1 Episode 6 “The Woman in the Wall.” When the Dr. Brennan, who takes everything too literally, attempted to go to a club misunderstandings are bound to happen, but when one of those misunderstandings leads to the reveal of a mummified body covered in meth inside the club’s wall it leads to a fascinating investigation into the politics of the rap business.  This episode will give you a basic understanding of each of the characters, without weighing the episode down with back-stories. At this point in the show the scientists have become more comfortable with their investigative roles so they are able to put their science to full use in solving this murder. We see Brennan, a beautiful scientist who doesn’t understand basic human interaction, move into new territory to analyze the hip hop and rap culture in her “unique” anthropological lens. We also see Dr. Hodgins, another of the eclectic scientist group, break out of his role as a bug and slime analyzer to help Booth create a plausible scenario for the crime. This show has created a new dynamic in crime drama shows, by putting together scientists who follow logic to conclusions and FBI angents who follow their instincts Bones has created a new type of crim drama that separates itself from the stereotypical crime dramas like CSI. If this episode doesn’t get you hooked then chances are this isn’t the show for you