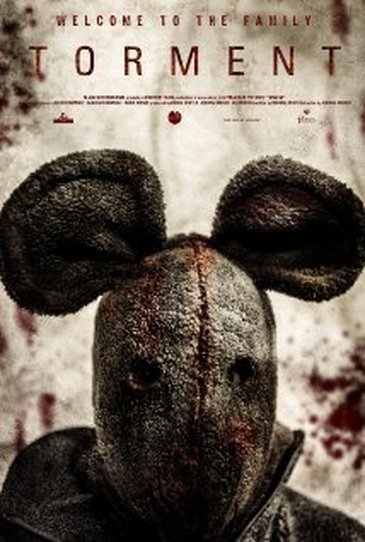 Watching a god-awful horror movie puts me through the same degree of pain as getting a tooth pulled without any articaine. Jordan Baker’s horror movie Torment was produced in 2013; this eighty minute film is personally rated ‘R’ for “ridiculously underrated”. It is given a sympathetic three out of five stars by the majority on Netflix. Torment is fairly new and has the misfortune of being birthed after a load of awesome horror films that are built to perfection. Movies such as Texas Chainsaw Massacre and Cabin in the Woods makes it impossible for a filmmaker with an nonexistent expertise of horror films to prosper in this movie subculture.


The plot basically builds  off of other movies that can be considered ancestors of Torment. Despite the title, there is an extremely deprived amount of the act of torment and fright displaying throughout the film. I must say-ATLEAST- Baker doesn't  use the usual group of teenage friends as the main characters like a lot of other scary movies  do. Instead the main casts consist of a family of three: Cory the husband (with a previously deceased wife), Sarah the wife and stepmother (newly married to Cory) and Liam (Cory’s seven year old son). Cory takes his family to his old country cabin in an attempt to unite Sarah and Liam. This amalgamation turns into a rescue mission when Liam disappears and four murderers begin to emerge. It was so  unlikely that the son would've been kidnapped. It was unexpected, despite the fact that both parent’s faces are  scratched out while the son face is still intact on family portraits throughout the cabin. In the introductory scene, a female neighbor notices the house that has been standing tall besides her for the first time in years. Looking carefully at the screen, I notice nothing suspicious. So is  it really just her first time noticing the home? Is it safer to say it was built overnight? She sure seems dumbfounded about this home’s presence, but then again it is possible for one to overlook the only house that is built right beside her home in the middle of the woods. I’m sure it happens all the time. The introductory family consists of a mother, a father and daughter until the parents are brutally murdered leaving the daughter to become part of the murderous family. Totally didn't see that coming even though the murderers kept her alive instead of automatically killing her like they did to her parents. The director finally moves on to the family that is supposed to make a difference in this movie; the director begins with  the location replacement traveling through the foggy woods which is later typically used to add to the “horror”.  Liam is abducted which causes Cory and Sarah to split up and battle murderers in pursuit of Liam. Cory and Sarah use psychology, strength and perseverance to overcome obstacles and are willing to sacrifice their lives to guarantee the safe return of the small child.  I commend the director for allowing me to rest my mind with a lack of anticipation for the expect chain of events. The entire movie rambles through battle after battle concluding with Liam and Sarah as the only surviving witnesses to monstrous acts and allowing the murderers to escape by killing off police officers so they can ultimately kill again in a sequel. The suffocation of the reoccurring emphasis on the stuffed animals and vandalized pictures gives no rooms for an acceptable plot twist.


At this point I try to focus mainly on the effect, the cast and the characters themselves. Cory doesn’t feel like a gun is necessary after finding his home completely trashed. Sarah doesn’t think it is best to stay in a protective room and instead will  rather roam the dangerous halls of an unfamiliar home with an injured foot and a standard kitchen knife. But that is justifiable for women to be curious especially when their life is in danger.  I feel no bond between the characters. Even the usual sex scene between Cory and Sarah is  insignificant. There is  no connection between Liam and Cory either, although they are supposedly related. The simplest of living organisms such as a fly, a caterpillar and a dog can display more emotions towards each other after encountering for the first time. I have to congratulate the “father” murderer in the end with the best acting demonstrated in this entire film. He didn’t have any lines and is  only seen that one time for approximately thirty seconds but I love his performance the best. Those thirty seconds fill my heart with joy as the actor clings tightly to the small pocket knife and glares at the ambulance driver that was certain the murderous patient was still strapped tightly to the stretcher. Throughout the movie, I try  to understand the quote that is  displayed before the movie actually starts. It reads “When one has not had a good father, one must create one. -Friedrich Niztzsch  I believe I failed to understand the significance of this quote. As an amateur critic I cannot  open my mind enough to wrap around the idea that the director is striving for. The opening quote should be: “When one cannot create a good movie, one must destroy the culture in all.”