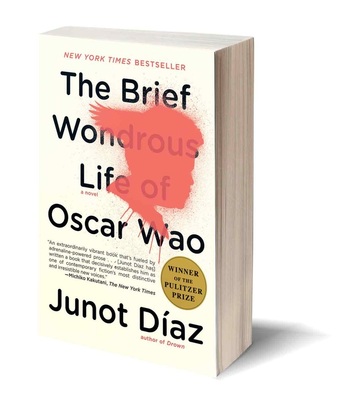 Junot Diaz’s, The Brief Wondrous Life of Oscar Wao, breaks through the barriers of identity and sheds light on what life is like for three young Dominican Americans.  Diaz takes a unique direction in the novel by shifting the perspective between three different characters, Oscar, Lola, and Yunior, as well as changing the setting between the U.S. and the Dominican Republic.  Under normal circumstances, the random variation between voices and settings would seem confusing, however, Diaz makes it work. He presents a fun, quirky story and gives readers insight into the Dominican culture all while examining the pressures placed upon young people to conform in society.  As Dominican Americans, the characters are all expected, by their families and friends in the neighborhood, to act a certain way and they each provide a different reaction to it. As a reader, being able to hear Yunior’s perspective, and Oscar’s, and Lola’s, is really beneficial because you get three different opinions on one subject. It also makes it easier for readers to find a character to connect with, which makes reading more enjoyable since you will actually want to learn more about this character and genuinely enjoy listening to their story.

The main focus of the story is the dorky and sensitive Oscar Wao. It’s hard not to feel bad for Oscar, who is the constant joke of his school and neighborhood, since he is not the typical muscular and good-looking Dominican like he’s supposed to be.  Diaz intended to create Oscar in this way to underline the major theme of finding oneself. The entire story revolves around the life of Oscar Wao and unravels his journey from a confused young boy to a man. Almost anyone can relate to Oscars story because every individual, at some point, needs to learn to be happy with themselves and find out who they truly are. Oscar’s transformation is made all the more difficult because he is compared to this ideal man who he is not comfortable being. He tries to lose weight, clear up his acne, and build the confidence to talk to girls, yet, it doesn’t work for him because that is not who he really is.  He’s a nerd who likes to role-play, play video games, and read science fiction novels. It’s the typical teenage angst story; Oscar deals with family troubles, relationships troubles, depression, identity crises and confidence issues, however, everything comes full circle in the end.  He finds that trying too hard to fit in only backfires, and so he needs to learn to be himself, who ever that is. Following Oscar’s soul searching journey is almost like getting a glimpse back into your middle school years and it can’t be anymore eye opening; embrace your inner self.

One who definitely embraces himself is Yunior, who becomes Oscars good friend and mentor during his college years. He’s popular, good looking, athletic, and suave- all the things Oscar wishes he could be. Yunior is the typical egotistical jock with all of the girls swooning at his feet. You would think that Yunior has it all figured out and is completely happy, however, you find out that is just the opposite. He is almost just as conflicted as Oscar because although he has lived up to his parents’ and culture’s expectations, he’s not so sure it has gotten him anywhere.  He starts realizing that not everyone likes the cocky player and learns this the hard way when he can’t get the one girl he’s been striving for since he was a young man.  Diaz gives you an inside look into the mind of one of those popular jocks that you definitely encountered in either middle or high school. It’s a unique perspective that not many writers take the chance and try to uncover and Diaz does an excellent job. As much as you want to dislike Yunior, you do end up feeling sympathy and an understanding towards him. He presents yet another unique struggle of a young teen searching for their identity and place in society.

Being that this story tells the tale of Oscar, Yunior, and Lola’s teenage years, there is going to be romance. Not only is Oscar’s search for a girlfriend a huge part of the story but the romance between Yunior and Lola adds greatly to the plot as well. It’s a complicated relationship because their personalities clash but Lola’s unique independence is what attracts Yunior in the first place. Lola, Oscar’s sister, is a complete feminist who does not give into society’s pressure at all. She is a rebel and refuses to be this sexy and dependent housewife that her Dominican mother claims she must be. Lola does what she wants whether it’s dressing like a punk chick or running away with her boyfriend for the week, which is admirable.  Instead of forcing herself to be something she’s not, like Oscar and Yunior; Lola embraces her identity and is proud of it.  She’s the role mode that Diaz created for all readers. She signifies independence and confidence, which is the message that Diaz wants to relate to all readers. It is almost as if he is saying don’t be like Yunior or Oscar who try to conform to the image of the Dominican male, but be like Lola who follows her heart.

The Brief Wondrous Life of Oscar Wao is real and Diaz doesn’t sugar coat anything. He gives you a very realistic and honest story of the life of young people in society and the constant struggles that come with it. Sometimes life doesn’t always end in a happy ending and sometimes you don’t get everything you want, which Diaz definitely makes clear in this book. He gives you the truth and leaves it up to you to decide what you do with it.